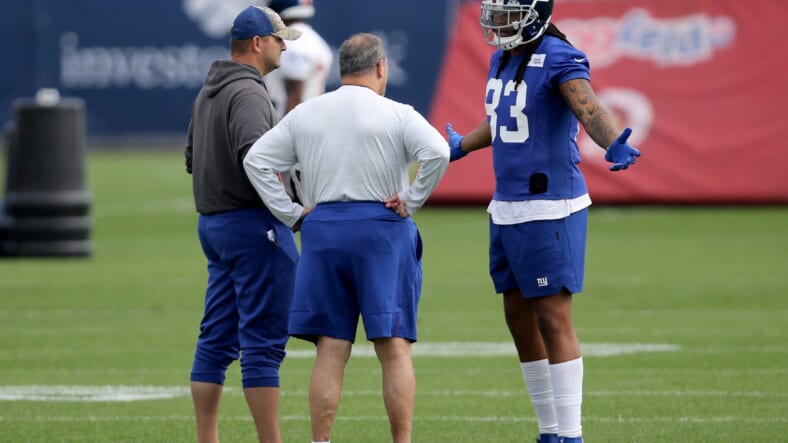 An odd situation occurred on Wednesday at the start of training camp for the New York Giants. With the team taking the field preparing to start the off-season, TE/WR Kelvin Benjamin was stopped short of joining his teammates by head coach Joe Judge and general manager Dave Gettleman.

Gettleman was seemingly doing Benjamin a favor, bringing him in for minicamp and letting him compete on the back end of the roster. However, Judge asked him a simple question two months ago, and it was regarding weight loss.

Essentially, Judge requested the veteran receiver cut 20 pounds off his frame, but Benjamin was unable to do so. Instead, he showed up to practice 17 pounds overweight, which incited a quick response from Judge, sending him on his way and cutting him that very moment.

After Benjamin walked off the field somberly, Zack Rosenblatt of nj.com managed to secure an interview with Benjamin later on in the day.

â€œIt was just like they were trying to sabotage me to get me out of there,â€ Benjamin said.

â€œI just felt like from Day 1, once I stepped on the field, once I put on the colors, he never liked me,â€ Benjamin said. â€œHe didnâ€™t even want me there.â€

It is entirely possible Judge with simply doing Gettleman a favor, bringing Benjamin in to practice with the team in an attempt to revive his NFL career. However, it seemed as if there was never any serious chance that Benjamin would make the roster, spurring his aggressive tirade after cleaning out his locker.
Kelvin went as far as the rip Judge, stating that he cusses and will never win a Super Bowl. Someone should probably tell Benjamin heâ€™s one quite a few with the New England Patriots and a National Championship with Alabama. His success far supersedes Benjamin and his lack of discipline in the NFL.

â€œI have a perspective on Joe Judge,â€ Benjamin said. â€œHeâ€™s not a coach that can ever win a Super Bowl because he sits there and cusses all day. You can tell heâ€™s one-sided about everything. Heâ€™s a know-it-all. Thatâ€™s not how itâ€™s supposed to work. We all can learn from each other. Weâ€™re all humans at the end of the day. The true colors will come out.â€