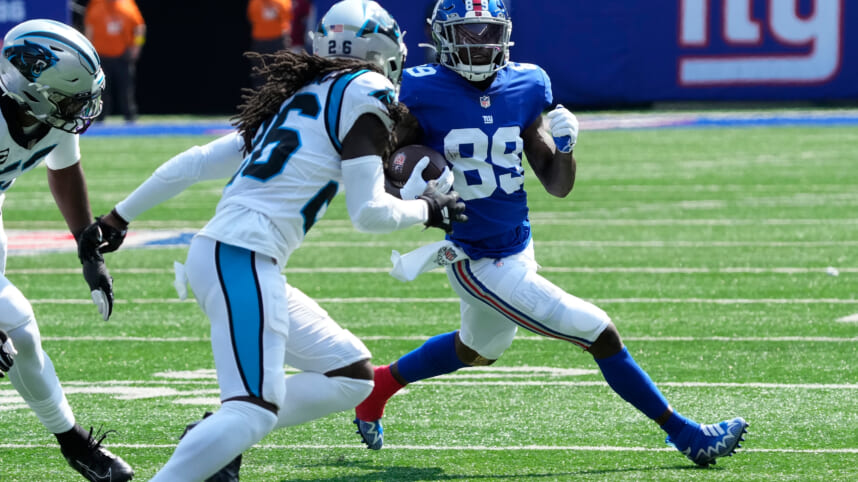 It seems as if the New York Giants have been waiting for receiver Kadarius Toney to get healthy ever since he was drafted in 2021. The former 20th overall pick last year played in nine games as a rookie, appearing in just one over the final seven contests.

When the Giants require his services, Toney is unfortunately injured and unable to give 100%. In fact, over the first two games of the 2022 regular season, Toney played in 12% of offensive snaps in Week 1 and 38% in Week 2 against Carolina.

It seems as if Toney is only capable of being utilized on occasion, and that is given he practices for a full week without being hampered. Unfortunately, Toney’s injury status was downgraded on Friday, not practicing at all after being a limited participant on Thursday. He has been dealing with a hamstring injury for several weeks now, but he is not phased by the lack of playing time.

“I was on it, off it, game played, we won, end of discussion,” Toney said recently regarding his aviaiblity last week against the Panthers. “It’s a mindset thing. It’s all about what you want to do, what you want to get accomplished.”

Seemingly, the Giants don’t need either Toney or Kenny Golladay to win football games, which is likely what head coach Brian Daboll is thinking. He can’t rely on either to produce given their injury history or lack of effort, which is why we’ve seen plenty of David Sills and Richie James over the past two weeks.

Players who need to step up for the New York Giants in Week 3:

After recovering from a torn Achilles suffered in the final game of the 2021 season, Shepard has made a remarkable recovery. Shep played in 72% of offensive snaps in Week 1 and 88% in Week 2, hauling in six receptions for 34 yards against the Panthers. The Giants will be hoping to get him more involved, especially if Toney and Golladay aren’t factored in.

Sterling is still a reliable target that Daniel Jones can trust, and while James has gotten the majority of security blanket looks, this could be the game where the veteran finally looks like his old self again.

If the Giants don’t have star interior defender Leonard Williams due to any injuries suffered last week, Dexter Lawrence will have to step up in his absence.

Lawrence has had a stellar start to the 2022 campaign, recording six total pressures (over 2 weeks) and three quarterback hits last week alone. He has recorded four tackles, providing the Giants with a great pass rush from the interior while making an impact in the run game as well.

The Giants’ coaching staff has spoken highly of Lawrence and his impact up to this point, but he will have his hands full if Williams is unable to start alongside him.

The Giants threw Cor’Dale Flott into the fire last week against DJ Moore of the Carolina Panthers. Flott gave up 16 yards and a touchdown on three targets, having some trouble in the second half.

Eventually, Flott was pulled from the game after dealing with cramps, forcing the Giants to utilize Fabian Moreau, who held up adequately.

However, Flott will have his hands full once again against the Dallas Cowboys, especially if Michael Gallup is expected to return on Monday night. Adoree Jackson could end up trailing CeeDee Lamb around the field, given he features in the slot over 50%, Darnay Holmes may have to lineup across him.

The Giants will likely try to force Cooper Rush to beat them with his arm, so having stout coverage is a necessity, especially in Wink Martindale’s defense that predicates heavily on man-coverage.