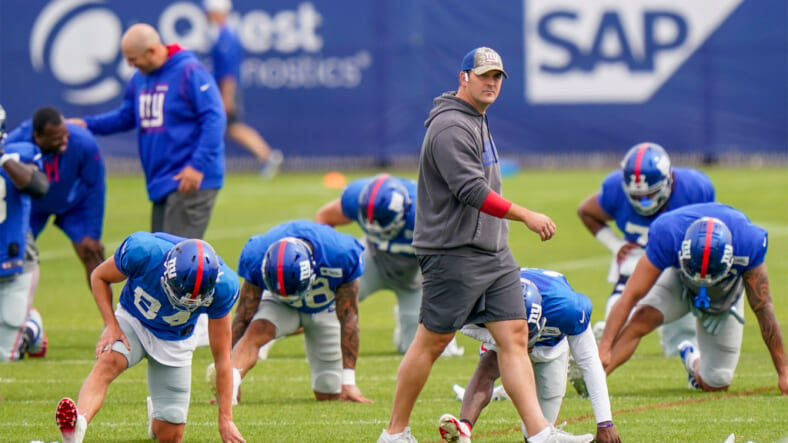 By now, most around the league are aware of New York Giants head coach Joe Judge and his methods. Judge is becoming one of the more polarizing coaches around the league, as Giants fans largely credit him with the team looking competitive last season while many in the national media believe that Judge is just playing a tough guy character instead of genuinely leading.

The talks about that picked up once again thanks to the way the Giants have handled training camp. Discipline has been a focus, as players have had to run laps for mistakes. Reportedly, the entire team ended up having to run after the notable brawl that ended up including most of the team.

While players on the team have largely been fine with the tough measures, some former players from around the NFL believe the way the Giants are going won’t end well.

Much of the contention seems to be around the parallels between Joe Judge and the New England Patriots organization. Judge, of course, was part of that organization before joining the Giants. He immediately brought over some aspects of their culture, but that has earned both praise and criticism depending on who you ask.

Former NFL player Shaun Smith went as far as to say the Giants are the new Patriots.

Of course, making a comparison to the Patriots in a negative way is a bit strange in this situation.

The Patriots are indeed infamous for having a strict coaching style under Bill Belichick and high standards for players, but that has paid off for them with incredible success. If the Giants could achieve similar success while only having to deal with some hurt feelings as a consequence, their hiring of Judge as a little known coordinator would be a historic steal.

Geoff Schwartz, who played with the Giants for a brief time himself, believes the rough practices had something to do with Joe Looney’s retirement and criticized Judge over it.

Joe Looney gets signed in his first two practices he's got to run a lap for a mistake and then run sprints + pushups to end practice for a fight. Brutal

we are also adults. Running for someone else making a mistake doesn't teach accountability.

Is there merit to the complaints?

It’s true that it’s possible to lose the locker room with an overly strict coaching style. It’s happened to a number of coaches in the past, especially ones that weren’t able to compensate for their harsher style by winning. However, it shouldn’t be assumed that the same outcome will happen with the Giants and Joe Judge.

Even if some of Judge’s critics are former NFL players, those players don’t have experience within the Giants locker room right now. If the Giants were dealing with poor morale and finding it hard to attract players to play for Judge, there would be more reason for concern – but it seems like the opposite is true.

This offseason has been more of a positive one than the last, and interviews have confirmed that Judge was a part of the decision for some of the team’s most high profile free agents.

His style isn’t for everybody, as multiple Giants players have said this offseason. But there is a market for it, and it appears to be a good fit for the players the Giants have gathered now.

It’s often not hard to tell when things are going bad in a locker room – a sense of apathy from the players in public as well as anonymous complaints to the media are telltale signs. But the Giants have avoided that, and if anything the locker room has been far more energized than it was under Judge’s nicer predecessor Pat Shurmur.

Should the Giants ownership and fans be worried about the culture Judge is building? Not really. The Giants made back to back hires with more lax personalities before deciding on Judge, and neither one of them accomplished much.

It’s too soon to say if Judge is truly the coach of the future, but right now, his coaching has been a factor in giving the Giants hope. And if Judge proves that the locker room’s high opinion of him right now is deserved, that polarizing reputation around the league will be well worth it.

Some players may have a problem with it, but based on everything we’ve seen this offseason, it looks like those players aren’t the ones on the Giants roster whose opinions on the subject matter far more than outside media figures and personalities.