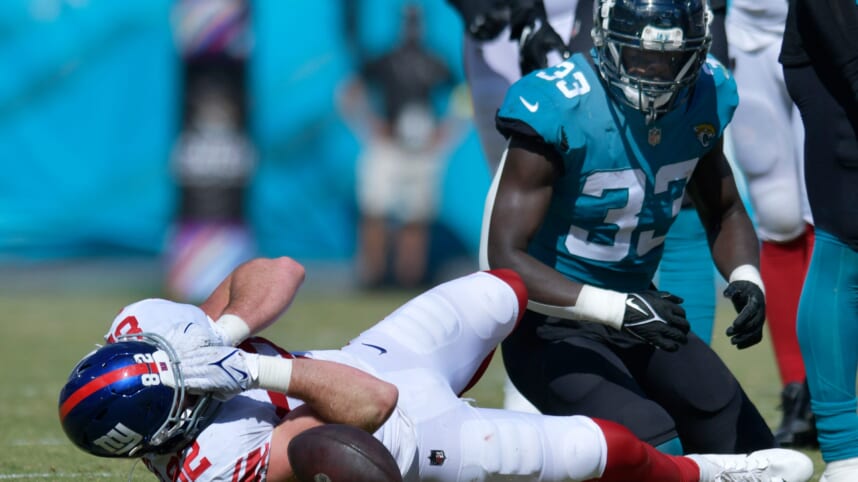 The New York Giants might’ve walked away from Week 7 with a victory against the Jacksonville Jaguars, but they certainly endured several battle scars. Multiple offensive players went down during the contest, but that didn’t stop the Giants from scoring 23 points and doing enough damage to secure their sixth win of the 2022 season.

However, they may have three integral pieces missing for the next few weeks: Evan Neal, Ben Bredeson, and Daniel Bellinger.

Losing fourth-round rookie tight end, Daniel Bellinger was a huge blow for the Giants’ offense. He’s been a force in the red zone and even better as a run blocker. Unfortunately, he was poked in the eyes after a run and catch, leaving the game prematurely with blood dripping down his jersey.

The early diagnosis is that his vision is OK, but he will require surgery. A timetable for this type of injury is unknown, but at the very least, the Giants may have dodged a bullet regarding his eyesight.

Rookie right tackle Evan Neal has gradually improved as the weeks have gone by. Unfortunately, he was rolled up on after a play, writhing in pain as he lay on the floor. Fortunately, the injury doesn’t seem to be season-ending as previously thought. Neal is yet another Giants player who has succumbed to an MCL sprain, which will take him a few weeks to recover from, but he should be OK to return this season at some point.

Starting left guard Ben Bredeson also went down and was carted off the field with a knee injury. Early reports indicate that Bredeson also avoided a serious issue, so he should also be able to make a return at some point in the future. Further testing is a necessity, but at the very least, he should recover within the next few weeks.