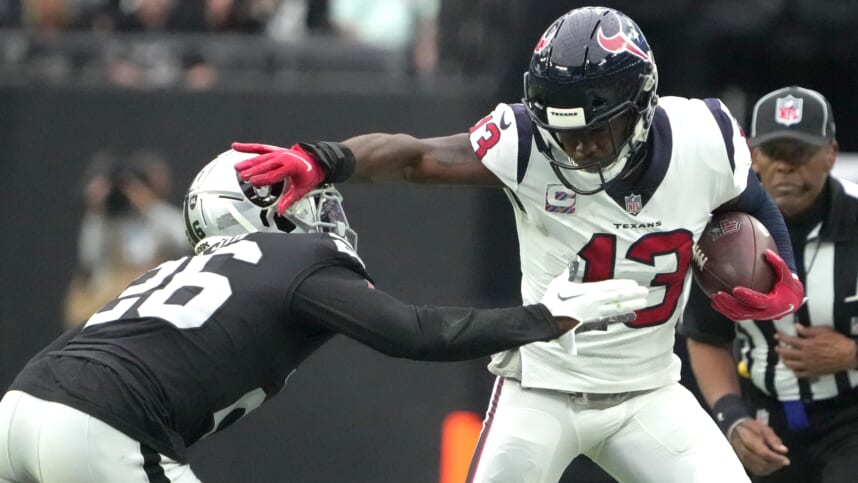 It is no secret the New York Giants could use more support at the wide receiver position. After trading Kadarius Tony to the Kansas City Chiefs earlier this week, the Giants are no longer waiting on their electric playmaker to return from injury.

Instead, they will continue to roll with Wan’Dale Robinson, Richie James, David Sills, and Darius Slayton. Big-money receiver Kenny Golladay is slowly getting healthy after suffering an MCL sprain several weeks ago, but his role in the offense has diminished significantly ever since the new regime took over.

Reports have indicated that the Giants are intrigued by Broncos receiver Jerry Jeudy, especially since he spent a year with Brian Daboll in Alabama. However, according to Jordan Schultz, Big Blue also has its sights set on Houston Texans receiver Brandin Cooks.

The New York Giants should steer clear of Brandin Cooks:

Cooks is an intriguing target at 29 years old. Cooks signed a two-year, $39.76 million deal this past off-season with an out after the 2023 season. His contract counts $43.5 million in dead cap this year and $34.2 million in dead cap next year with a $26.6 million salary hit. Based on his financial situation alone, the Giants should stay far away from Cooks, given his salary hit for 2023.

This season, Cooks has hauled in 28 receptions on 47 targets for 281 yards and a touchdown. However, he did record 1037 yards and six scores last year with a 67.2% catch rate. Cooks has a career 5.7% drop rate, which is a solid number the Giants would love to have. However, he does host a 15.2% drop rate, with five this year alone, dragging his average up considerably.

Given the financial commitment general manager Joe Schoen would have to unload for Cooks, they are better off settling for a younger option like Jeudy, but the asset difference would be significant. Notably, the Giants may be able to land Cooks for a late-round draft choice based on this difficult contract, but Jeudy may garner a bit more value and force the Giants to give up significant draft capital.