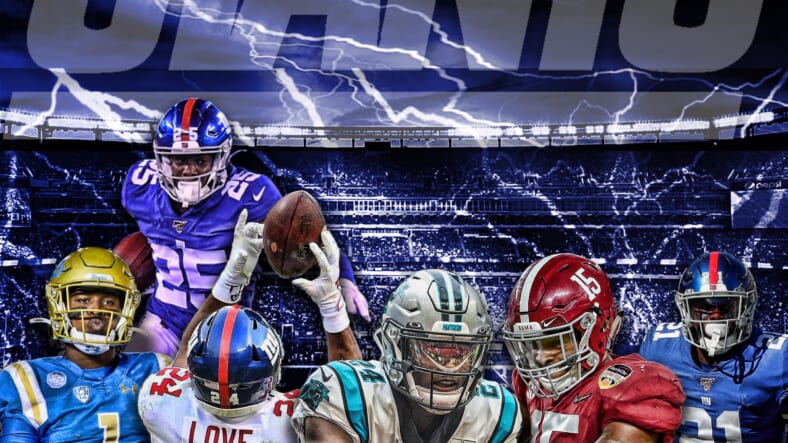 The Giants’ secondary will be versatile in 2020. Head coach Joe Judge emphasized versatility in his introductory press conference and he has just the right group of guys in the secondary to fit that mold. James Bradberry, Xavier McKinney, Jabrill Peppers, Darnay Holmes, and Julian Love are all young, versatile talents that will help the defense succeed next season.

According to Pro Football Focus, XavierÂ McKinney played everywhere for Alabama â€” 323 snaps in the box, 227 in the slot, and 271 deep. Many Giants fans had hoped the team would select Isaiah Simmons fourth overall. Simmons was the ultra-versatile linebacker prospect that ended up with the Cardinals. The Giants took Andrew Thomas, passing on Simmons and his versatility, but they were able to land the next best thing in Xavier McKinney in round two.

The Giants’ other exciting draft pick in the secondary, Darnay Holmes, is also a versatile player. Holmes spent his entire collegiate career playing outside cornerback. Entering the NFL this season, Holmes will likely make the transition to the inside and be the team’s nickel cornerback. However, Darnay could compete for the second outside cornerback position. Do not rule him out as an outside cornerback just yet- Darnay has the talents to play both positions.

James Bradberry was another new addition for the Giants’ defense in 2020. Bradberry was a splash signing for New York in free agency and he will serve as the team’s primary cornerback on the outside. But James is another player that has the versatility to play both inside and outside. He rarely played slot cornerback in Carolina, but he was sufficient when lined up there. Another aspect of James’s versatility is his ability to shadow any receiver. Bradberry followed the opposing team’s top receiver in each game with the Panthers. He will likely play a similar role in the Giants’ defense.

21% of James Bradberryâ€™s career coverage snaps have been while aligned against Julio Jones, Michael Thomas, or Mike Evans. James Bradberry also recorded 9 pass-breakups last year, tied for 16th in the NFL. Also 20th in NFL passer rating against (78.9) min of 550 snaps (PFF). Bradberry is also the oldest player in the Giants’ secondary at only 26-years-old.

Jabrill Peppers displayed his versatility in his first season with the Giants in 2019. Entering the NFL Draft in 2017, Peppers was considered a “Swiss Army Knife.” He truly did it all in college, lining up all over Michigan’s defense and making a significant impact on special teams. Peppers was mainly a box safety with the Giants last season, but he did line up in the slot and at free safety on numerous occasions.

In 2019, rookie defensive back Julian Love was a pleasant surprise on the Giants’ defense. The fourth-round pick was projected as a slot cornerback upon being drafted. However, he ended up converting to the safety position in the NFL. But Love still has his coverage skills from college and could compete for the Giants’ second outside cornerback position in 2020.

Julian Love could potentially line up all over the defense in 2020. He could line up as an outside cornerback, move back into the slot, and continue to play both free and strong safety. Adding Xavier McKinney into the mix with an already strong tandem in Love and Peppers could give the Giants one of the best safety groups in the NFL.