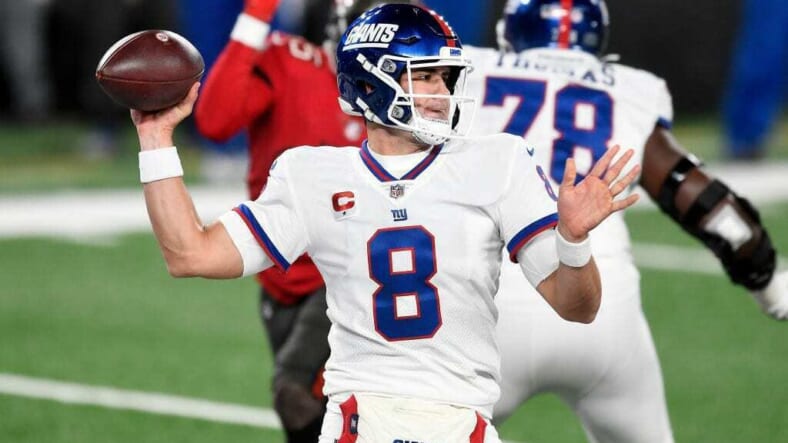 EAST RUTHERFORD, NEW JERSEY - NOVEMBER 02: Daniel Jones #8 of the New York Giants looks to pass against the Tampa Bay Buccaneers in the first half at MetLife Stadium on November 02, 2020 in East Rutherford, New Jersey. (Photo by Sarah Stier/Getty Images)

The New York Giants exit their bye week with a Monday Night Football matchup against the Bucs, and predictably, Tampa has the advantage in the odds. The advantage for Tampa Bay has been set at -10.5 points (-110) and the over/under at 49.5 according to BetMGM.

But there’s also reason to believe the Giants won’t settle for a blowout here, and that they might even beat the spread or more. That reason is desperation; after wins by rivals in the division, the Giants very much need to keep up their own good form if they want to avoid another season of being out of the hunt early on.

One factor that might make this game closer than some expect is injuries.

Specifically, injuries in the secondary for Tampa Bay might hurt their performance against the Giants passing attack. Cornerback Carlton Davis III has been on the IR since suffering a quad injury in week 4, and CB Richard Sherman is also out following a pre-game injury on Sunday.

Sherman hasn’t been a regular player for the Bucs this season, so the Bucs may not see a big drop in play from his absence in this game. But Sherman’s injury still prevents Tampa from addressing a need at the position, which is why Sherman was signed this season.

We have photo evidence Rob Gronkowski WAS at practice today. Update afterward with Bruce Arians.

And, fortunately for Giants defenders, the Bucs may not have Rob Gronkowski at tight end for this one. Gronkowski was at practice on Wednesday, but was absent the previous week and has been dealing with a rib injury over a number of weeks.

Injuries on the New York Giants side

The Giants do have their own injuries to deal with. However, things are trending in the right direction for some of their important playmakers.

The team has designated left tackle Andrew Thomas to return from IR, which is a big step for the offensive line. Thomas has become a key part of that line this season and his presence on the field would go a long way in making Daniel Jones more comfortable in the passing game. But right now, it’s not clear when Thomas will actually return to the field.

More likely is the return of Saquon Barkley, who has taken part in drills this week and seems to have a more optimistic timeline towards coming back.

Will the Giants beat the spread?

Let’s be completely honest here: the Giants are overmatched against the defending Super Bowl champs. Having to take on a motivated Tom Brady is also not a good spot to be in. And it doesn’t help that Daniel Jones is winless in primetime games.

It’s hard to project the Giants winning this one outright, based on the overall circumstances as well as Daniel Jones’ performance against Tampa last year. He had two touchdowns offset by two interceptions, and had his fifth worse quarterback rating of the season.

But Tampa isn’t quite as dominant right now as they were last year, and the Giants definitely have a chance to play up to the competition and stay in this one towards the end.