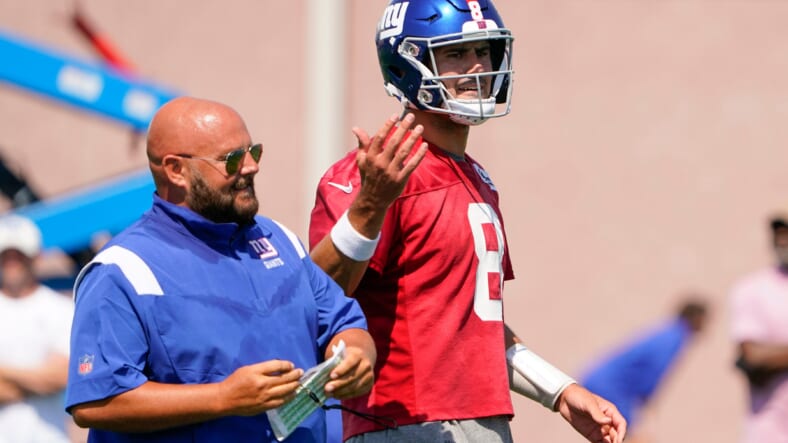 As New York Giants football gets underway in just about a week for the 2022 season, all eyes are on fourth-year quarterback, Daniel Jones.

Jones, a recent sixth-overall pick for the Giants, has underwhelmed for the most part and did not have his fifth-year option picked up this offseason.

The hope now is that having some improved talent and, more importantly, a recent highly successful offensive head coach in Brian Daboll can give Jones the support that he needs to develop.

Recently, the Giants’ new head coach, Daboll, spoke on where Jones is at entering their first regular season together.

I think he’s very consistent in his approach and how he does things. He doesn’t get too high or too low, which it’s easy to do in training camp. He’s got a really good mindset in terms of staying even-keeled. He’s very competitive. He’s a good leader. He’s a tireless worker. He’s always in here – he’s in here early, stays late, and you see him working with his teammates after practice. I think he has a lot of good qualities that we look forward to working with and helping him develop.”

Via Patricia Traina of SI

Certainly, some encouraging things to hear from Daboll on the Giants’ 25-year-old signal-caller. Hopefully, the two can gel together well in year one and prove clear development.