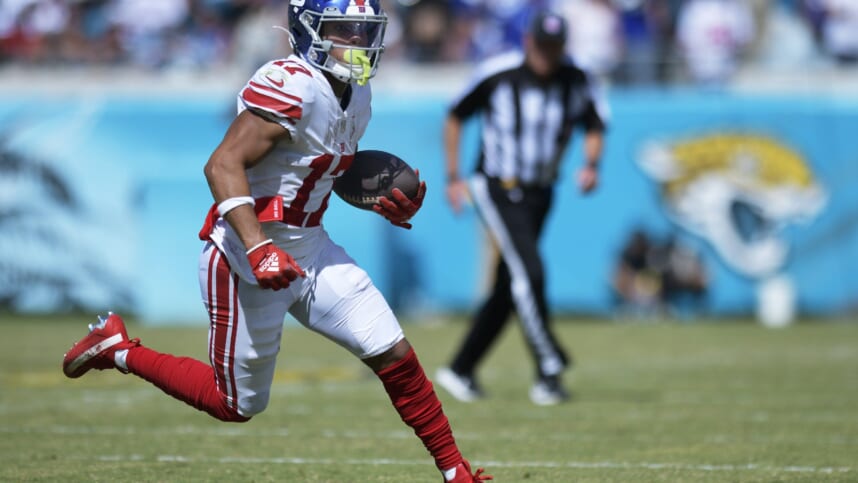 The New York Giants can use all the firepower they can get on the offensive side of the football. The coaching staff has relief primarily on quarterback Daniel Jones and running back Saquon Barkley to carry the load, but eventually, they will need a receiver to step up and make plays routinely.

Darius Slayton did a great job in Week 7, hauling in a 44-yard touchdown pass, but don’t let the performance of rookie second-round pick Wan’Dale Robinson get swept under the rug.

The New York Giants have a spark plug in Wan’Dale Robinson:

Robinson returned in Week 6 following an MCL sprain he sustained against the Tennessee Titans in Week 1, leaving an impact across two games. He played in just 23% of snaps against the Baltimore Ravens in Week 6, hauling in three receptions for 37 yards and a touchdown. Against Jacksonville this past Sunday, he played in 69% of snaps, catching six passes on eight targets for 50 yards.

It is becoming blatantly obvious that offensive coordinator Mike Kafka and head coach Brian Daboll are scheming Robinson into the game with designed touches. Whether it be screens, jet sweeps, or utilizing him as a traditional receiver, he’s been able to make an impact in a myriad of different ways. The former Kentucky stand-out dominated in the screen game during his final collegiate season but also made an impact downfield, despite his lack of catch radius and size.

However, with a lack of receiving talent on the Giants’ offense, Wan’Dale is set to earn even more playing time over the next few weeks, given he doesn’t suffer any injury setbacks. He was knocked out of the game a bit prematurely after being stepped on, which is why his snap count stopped at 69%. However, given he is healthy and ready to go against the Seattle Seahawks in Week 8, the Giants should feed him the ball significantly, manufacturing a spark that isn’t derived from Saquon or Jones on the ground.

The most important variable, though, is allowing Jones to utilize his arm rather than risking his health by using his legs too frequently. Most of Jones’s injuries have come on the run trying to extend plays. If they can utilize him as a traditional quarterback and design runs for him to stay safe, they can extrapolate on his talents and maintain his continuity.

The Giants have only scratched the surface of Wan’Dale’s capabilities, and given he was a Joe Schoen and Brian Daboll selection, his usage should only increase the rest of the way.