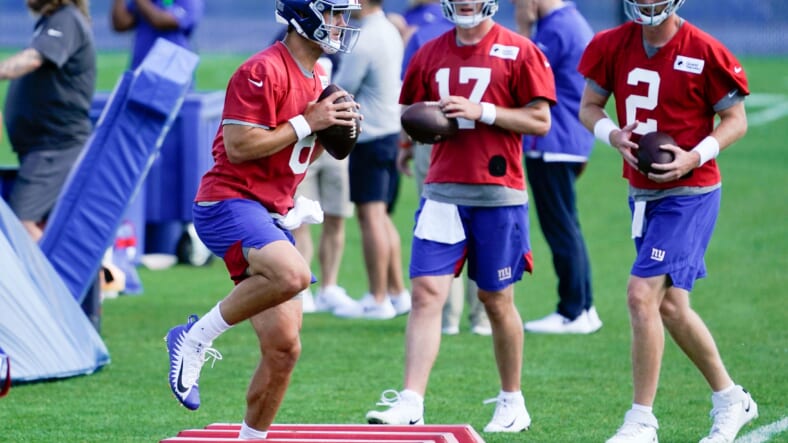 One of the biggest questions for the New York Giants heading into the 2021 season is their offensive line. Fans and analysts remain skeptical this group can rise to the occasion, simply based on their performance in 2020. The Giants’ staff didnâ€™t allocate a plethora of resources to improve the OL, but they invested three draft picks in 2020 to help bolster the unit.

Drafting Andrew Thomas, Shane LeMieux, and Matt Peart, they expect all three to take a significant jump the season, and there is a high probability they end up starting right out of the gate. Thomas is the anticipated left tackle, Peart must beat out Nate Solder for the starting rate tackle job, and Lemieux, who was ranked as the worst pass-blocking guard in football last year, needs to take a significant step forward.

To start organized team activities, the Giants rolled out an extremely young unit, with an average age of about 22 years old. Letting veteran Kevin Zeitler walk in free agency significantly lowered the average age of each player, and it seems they will stick with Lemieux and Zach Fulton, a free agent signing they made this off-season to help provide some depth in the interior.

The Giants' offensive line today looked like this, per @art_stapleton

100% going VERY young, worried about Shane but I'm optimistic this line WILL get better #NYG

The scariest part about this group is that if injuries take their toll or inadequacies hit, the Giants donâ€™t have too much depth to work with. Relying on Zach Fulton, Jonotthan Harrison, and Solder doesnâ€™t exactly scream quality.

However, the hiring of Rob Sale, formally the offensive coordinator for the Louisiana football program, should establish some sort of continuity and consistency in the trenches. Aside from acting as the OC for Louisiana, he was also the offensive line coach, showcasing his versatile attributes.

In his second season, Sale helped Louisiana break numerous offensive school records, including total offense, total touchdowns, most rushing yards, most rushing touchdowns, and most passing touchdowns. His influence has proved to be significant, and the Giants stole one of the most underrated assets in college football.

Joe Judge has proven that his hand-picked coaches make a significant impact, and I fully expect this offensive line to take a step forward with Sale 100% focused on their development.