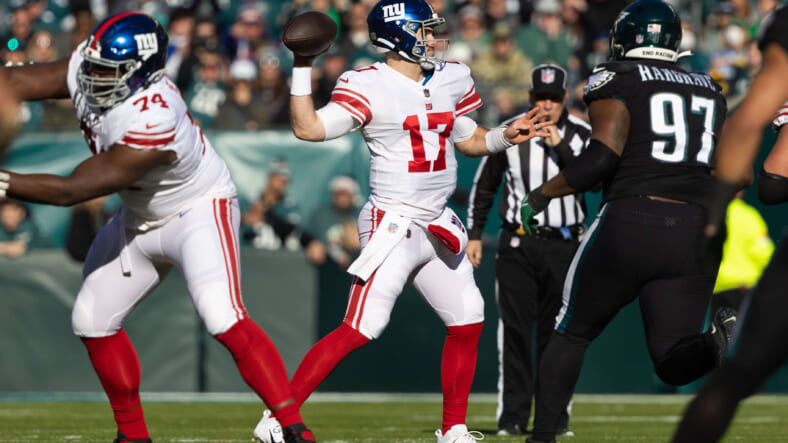 This weekend, the New York Giants traveled to Philadelphia to face the division-rival Eagles. The Giants came away from the game with another loss added to their record, falling to 4-11 on the season. The Giants split games 1-1 with the Eagles this season. The final score of this blowout Giants’ loss was 34-10.

Jake Fromm started at quarterback for the Giants and was benched midway through the game. Fromm finished with 25 yards on 6/17 with one interception in his first career NFL start. Mike Glennon took over and did not look much better, completing 16 passes on attempts 26 for 91 yards, one touchdown, and one interception.

After throwing three interceptions in the last contest between these two teams, Jalen Hurts bounced back with a two-touchdown 0 interception game today. Hurts and rookie wide receiver Devonta Smith connected on a touchdown as Smith totaled five receptions for 80 yards and one touchdown.

Giants running back Saquon Barkley struggled once again, rushing for only 32 yards on 15 attempts, with his longest going for seven measly yards. The Giants totaled 192 yards of offense compared to the Eagles’ 324 yards. Philadelphia won the turnover battle 2-0, interception the Giants twice and committing no turnovers of their own.

Could this loss change the Giants’ future?

Reports came out this morning indicating that the Giants are going forward with Joe Judge as their head coach in 2022. Seemingly, Judge’s job is safe, and so is quarterback Daniel Jones (Adam Schefter of ESPN). After today’s game, John Mara and the Giants’ ownership should reconsider this plan. This putrid performance by the Giants is bound to leave a sour taste in the mouths of Giants fans, giving little hope for the team’s future under current management and coaching. Major changes are needed for the New York Giants to turn this once-proud franchise around.