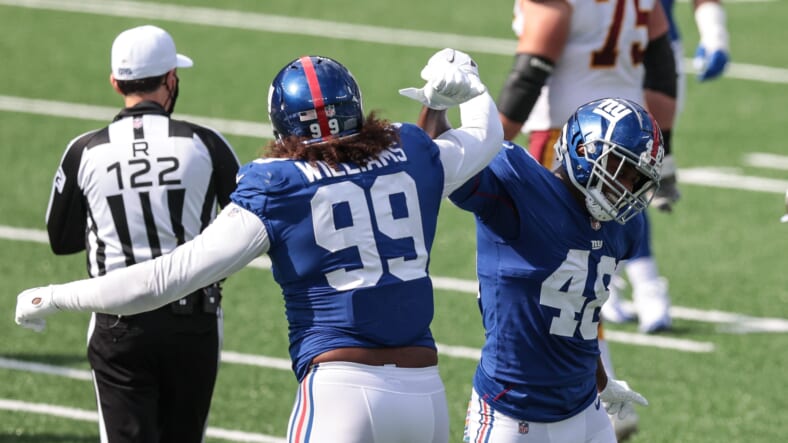 The New York Giants are gearing up to face off against the Baltimore Ravens in Week 6 starting at 1 PM. However, the team is projected to get back several impact players, or at the very least, guys who can produce on both sides of the football and contribute toward a potential fifth win of the season.

The Giants will get back star interior defender Leonard Williams, and rookie second-round pick Wan’Dale Robinson for Sunday’s game, boosting both sides of the football tremendously. Williams played in just 87 snaps before going down just before the second half against the Carolina Panthers in Week 2. He contributed four pressures in that game with three tackles. Williams is one of the better-run defenders in the NFL, and with Dexter Lawrence playing at an All-Pro level, the combination should be electrifying moving forward.

Williams is an incredibly durable and reliable player, having not missed a game due to injury before missing the last three due to an MCL sprain. However, he’s recovered quickly and is already prepared to make an impact against a strong Baltimore squad that relies heavily on Lamar Jackson’s mobility and a strong running game.

On offense, the Giants have been waiting patiently for the return of Robinson, considering the wide receiver corps has been shredded with injury and inconsistencies. They relied heavily on Darius Slayton, David Sills, and Richie James the past few weeks, especially after Kenny Golladay suffered an MCL injury and Sterling Shepard tore his ACL against Dallas.

The Giants have big plans for Robinson, given he is their second-round pack, and Brian Daboll and Joe Schoen are both high on his qualities. Robinson isn’t only a gadget player, he’s capable of being used as a legitimate receiver, despite his small frame and shifty approach.

The question regarding Wan’Dale is how many reps he will enjoy in Week 6, coming off a serious injury. I imagine he might get on the field for 50% of snaps, offering Daniel Jones a security blanket with potential usage in the red zone.

The Giants used them heavily in the RZ during training camp, and considering the team has gotten rather creative in past weeks on the goal line, Robinson has the agility to open things up and offer another outlet for Jones.