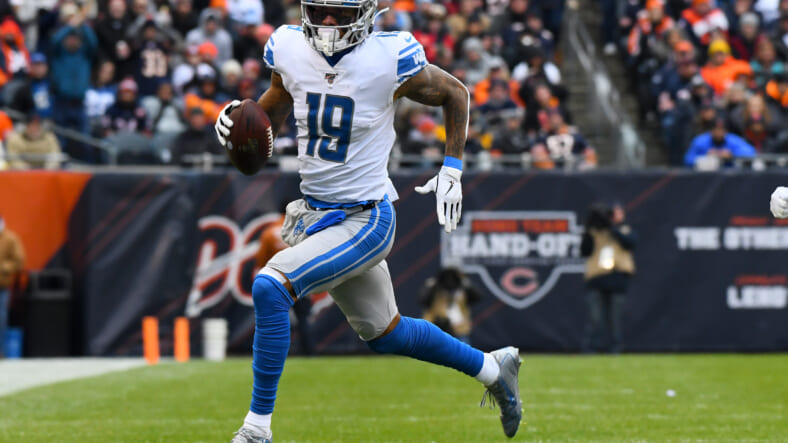 The rumors were flowing on Wednesday for the New York Giants, as they were connected to wide receiver Kenny Golladay, who is currently on the open market. The former Detroit Lion is reportedly planning to visit with the Giants, spending time with head coach Joe Judge and upper management. If all goes well, the Giants could have their WR1 by the end of the week, and what a massive addition he would be for quarterback Daniel Jones.

At the end of the day, bolstering the offense so Jones can reach his potential is exactly what the Giants need to do this off-season. Just think about the impact Stefon Diggs had on Josh Allen last year with the Buffalo Bills.

Golladay is capable of being a WR1, and he might come at a very reasonable price considering what top receivers normally go for. ESPNâ€™s Jordan Raanan projects that Kenny may only earn $12-14 million per year on a multi-year contract, and with the Cincinnati Bengals offering him a one-year deal, the Giants have a nice advantage and a bit of cash to spend.

1.) Kanny Golladay on the way!

Zack Rosenblatt of NJ.com connected with a current Giants player, who was adamant that the team needed Golladay:

â€œWe need him,â€ one current player told NJ Advance Media, speaking on the condition of anonymity. Multiple other players expressed a similar sentiment, that theyâ€™d like the Giants to bring in a player of Golladayâ€™s caliber.

The impact that Golladay would have on the offenses is profound. Not only would he open up the running game for Saquon Barkley, but he would allow receivers like Sterling Shepard and Darius Slayton to face off against lesser competition. The Giants averaged 17.5 points per game last year, good for 31st in the NFL. Their passing attack was lackluster â€” Sterling Shepard was man-marked by the opposing teamâ€™s CB1s. Shepard is a high-end WR2, and given the matchups, he can be an excellent receiver for Jones.

Ultimately, as long as the offensive line can hold up, adding a Golladay would completely revitalize the offense and give Jones no more excuses moving forward.

Another low-risk, high reward signing for the Giants. Odenigbo has a combined 10.5 sacks over the past two seasons, starting 15 games in 2020 with the Minnesota Vikings. At 26 years old, Odenigbo has the potential to be a solid rotational piece for the Giants, potentially on the interior. As a traditional defensive end, they could move him to defensive tackle, where he would feature at the 3-5 tech, providing support to Leonard Williams and Dexter Lawrence.