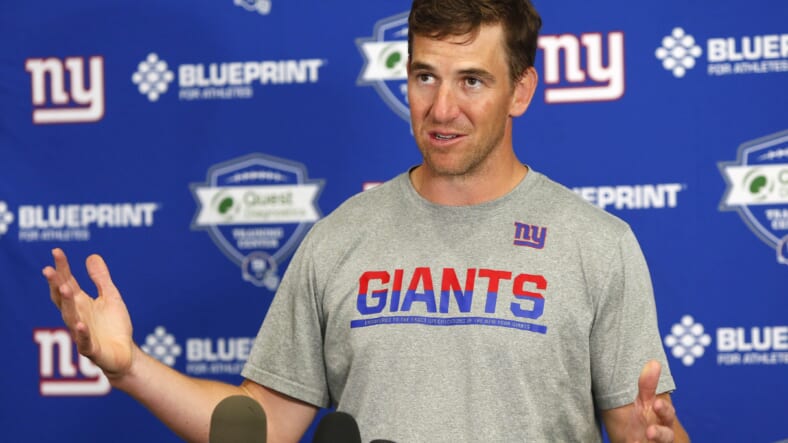 Retired New York Giants quarterback Eli Manning has had an eventful past year.

After spending some time outside of the public eye, Manning has become more of a celebrity presence recently through new ventures such as his gig as an ESPN broadcaster. He was also honored by the Giants this season, as the team retired his number 10 jersey at halftime against the Falcons.

It looks like the Ole Miss Rebels, Manning’s college team, are taking after the Giants in that regard. The school is set to use Saturday’s game as a chance to honor Manning in their own way and retire his jersey.

The festivities also include a peculiar change to the field design. Ole Miss has shown off pictures of the updated field, which reads ‘MANNING’ across both end zones.

During Manning’s time as a Rebel, he threw for 10,119 passing yards and 81 touchdowns. Impressively, basically all of those numbers came from three seasons, as Manning only had 33 passing attempts during his freshman year.

Interestingly enough, Eli may not be the last Manning to take the field for Ole Miss. His nephew Arch Manning is a five star recruit and arguably the top player in his recruiting class. Arch’s list of potential destinations includes multiple blue bloods such as Alabama and Clemson, but Ole Miss is also a contender.

Arch Manning is set to attend when Ole Miss takes on LSU. We’ll just have to wait and see if having his last name written in the end zone is enough to sway his decision in the direction that Ole Miss fans are hoping for.