New York Giants: Debunking the Eli Manning shouldn’t be in the Hall of Fame debate 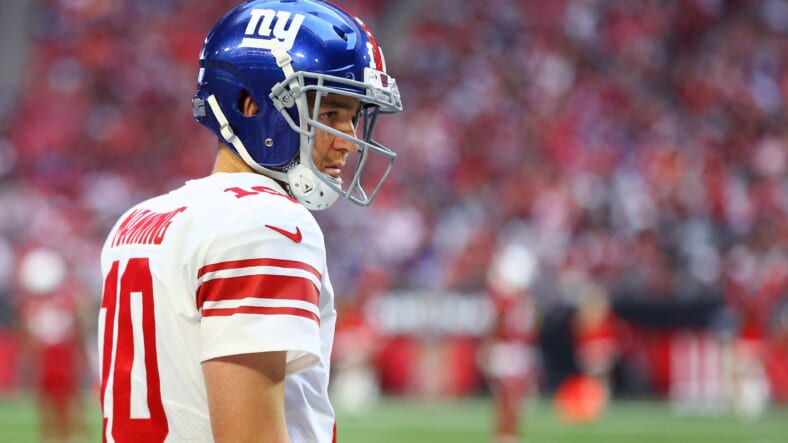 Eli Manning has announced his retirement from the NFL, and the New York Giants‘ great will be immortalized in Canton.Â  The news of his retirement has once again sparked the debate on whether or not Eli deserves a spot in the Pro Football Hall of Fame. Many believe that if Eli Manning gets into the Hall of Fame, then almost anyone can get in.Â  So should Eli be inducted in Canton?Â  In my opinion, “yes” is the only answer.

Why Eli Manning is an unquestionable Hall of Famer

The discussions on Eli Manning’s Hall of Fame future have ramped up again, and with great reason.Â  Here you are with an NFL quarterback that does not have the flashiest statistics, a not so pretty resume over the last eight seasons, and let us not forget the “Manning Face” craze.

However, what does it mean to be a Hall of Famer?Â  By definition, the Hall of Fame is an institution honoring the achievements of individuals in a particular activity or field.Â  So, when it comes to pro football’s version, what achievements do we honor individuals for?

Dan Marino, Warren Moon, Jim Kelly, and Frank Tarkenton are four quarterbacks in the Hall of Fame that never won a Super Bowl.Â  For Jim Kelly, he made it to the championship game four times, which is an achievement in itself.Â  Dan Marino, Warren Moon, and Frank Tarkenton all had achievements statistically and with awards.Â  Their passing statistics came during eras when the passing game took a backseat to the run game.Â  Some of Moon’s best seasons came in the early ’90s.Â  Two seasons, in particular, 1990 and 1991, saw Moon throw for nearly 4,700 yards each year.Â  The next closest in those seasons didn’t even break 4,000.

Eli Manning, in an era where the NFL became a passing league, had seven seasons over 4,000 yards, including the 2011 season, where he threw for more than 4,900 yards.Â  Unfortunately, he wasn’t the leader in passing yards that year.Â  Of course, it’s a passing league, so being able to meet these yardage numbers is more manageable, right?

There is no taking away from Warren Moon’s ability. He is an absolute Hall of Famer, and there is no debating otherwise.Â  However, where would his numbers compare in a pass-heavy league?Â  Would he be caught up in the numbers with other great statistical seasons?Â  Of course, nobody knows the answer to this, and there is no way to find out.Â  We know Warren Moon was a great quarterback.Â  A Hall of Fame quarterback, without the championships, the All-Pro’s, the Super Bowl MVPs.

This same argument could be made for Frank Tarkenton.Â  Only two seasons over 3,000 yards passing in a run-heavy league.Â  He has no Super Bowl victories, but he does have the MVP season.

So why are we knocking a guy who has the rings and the Super Bowl MVPs?Â  No, Eli Manning’s career stats aren’t great.Â  At least not in comparison to those he shares Sunday’s with.Â  One of those counterparts being labeled the greatest of all time.Â  We’re going to knock a guy’s statistics because they don’t stand out significantly from some of the most exceptional passers the game has ever seen?Â  In a league that is all about throwing the ball around?

Andy Dalton, Josh Freeman, Ryan Tannehill, and Jay Cutler, among others, have all had “good” seasons when looking at passing stats.Â  If the Hall of Fame were strictly about stats, it would be that “anyone can get in” enshrinement that those who are so outspoken against Eli being in, claim that it would be with him inducted.

It is without question that the Super Bowl victories, Super Bowl MVP’s and the longevity of his career are what will get Eli Manning a Hall of Fame induction.Â  Why should it be anything more than that?

There have been 12 quarterbacks in NFL history that have won the Super Bowl more than once.Â  Eli Manning is one.

There have been only five players in NFL history that have more than one Super Bowl MVP award.Â  Eli Manning is one.

There are only four quarterbacks in NFL history that have started more than 200 consecutive games.Â  Eli Manning is one.

There is only one quarterback in NFL history to have beaten the greatest quarterback and greatest dynasty in league history twice.

These are Eli Manning’s achievements.Â  This is why the New York Giants great deserves to be in the Hall of Fame.