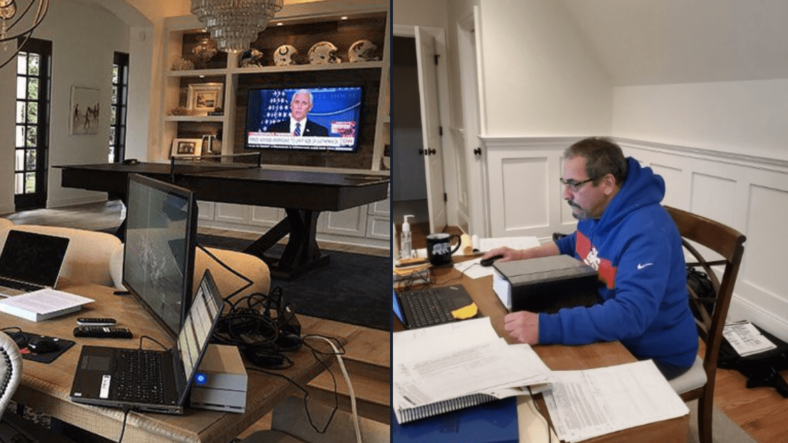 There’s no doubt that Gettleman is one of the older and more experienced general managers in the NFL, but that doesn’t make him any more prone to falling behind in the technological modernization-wave.

Younger, more adaptable GMs have begun to archive and evaluate in a paper-less fashion, using technology to expedite the process of printing each piece of paper to be filed into a binder ultimately. Gettleman would likely say in response,” if his computer crashes, he loses everything, I have everything in paper.” Any modern GM would counter, “I have all of my data backed up on three different USB drives.”

The Giants’ top office executive is behind on the times, and this picture details it perfectly.

*Notice the difference in monitor-to-paper ratio on each desk pic.twitter.com/3LLfF3ZVJQ

Remember when Gettleman was hired and made fun of the nerds in the back using their computers to rationalize probabilities like going for it on 4th down (a significant factor in the Eagles’ 2018 success)? He’s since backtracked and hired computer engineers to modernize the back-end of the Giants’ operations, finally coming around to modern-day football.

Dave still listens to his gut more than the average, younger general manager, which is fine to a degree. Take a look at Chargers’ GM Tom Telesco, utilizing a number of computer screens for easy mobility between projects and communication. Gettleman’s solo Lenovo Think Pad and binder can’t even compare to the uber-efficient method Telesco is portraying.

Despite the differences in both GMs, the Giants have begun taking a more modern approach toward their evaluation process, and working from home has undoubtedly sparked that transfer. I expect Big Blue to continue adapting to the streamlined technology-first method, but ultimately it won’t fully take place until the Giants move on from Gettleman. Now, if this method works for Ole Dave, don’t fix what’s not broken.

Gettleman has had plenty of success in the past, but the Giants need to see results now.