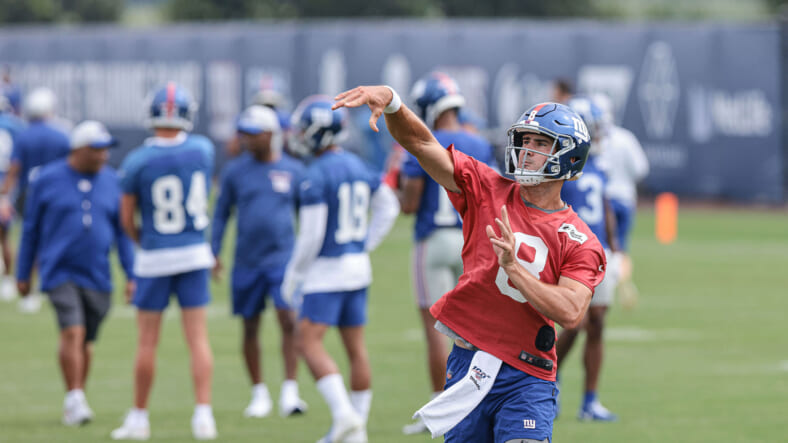 The New York Giants are preparing for their first preseason game of the 2021 season this Saturday. The Giants will face the Jets at 7:30 pm on Saturday after an exciting week of practice. The fans were finally welcomed back in MetLife Stadium on Wednesday as the New York Giants hosted Fan Fest, a fun-filled event that featured a team practice/scrimmage. Quarterback Daniel Jones has gone viral on social media for a head-scratching pass thrown during Fan Fest.

It’s not a setback.
And it’s not a reason to worry.
But QB Daniel Jones is still throwing inexplicable picks in practice.pic.twitter.com/VbKzJo325r

Some fans are not worried about this one throw made during a team scrimmage. But other fans are watching this play and becoming concerned that Daniel Jones will fail to break out in his “prove-it” third season. All fans are excited, though, to watch Daniel Jones suit up against another team in a game with some meaning. However, fans will have to wait a bit longer as head coach Joe Judge announced that Daniel Jones will not be playing in the team’s first preseason game of the season.

Daniel Jones will not play in Week One of Preseason

New York Giants head coach Joe Judge announced that starting quarterback Daniel Jones will not play in the team’s first preseason game this weekend. Judge’s game plan for this matchup is to treat it like a traditional Week Four preseason game from years past. Typically, in the final week of the preseason, the starters see minimal playing time if they see any playing time at all.

Daniel Jones will not play this week, but Joe Judge is not expected to take the same approach as the Los Angeles Chargers. The Chargers announced that their franchise quarterback Justin Herbert will not play at all in the preseason in an effort to prevent any injury risks. The Giants, however, are expected to let Daniel Jones and the rest of the starters play a good portion of the first half in their third preseason contest. The strategy here will be to get the players prepared to handle the speed of a full game.