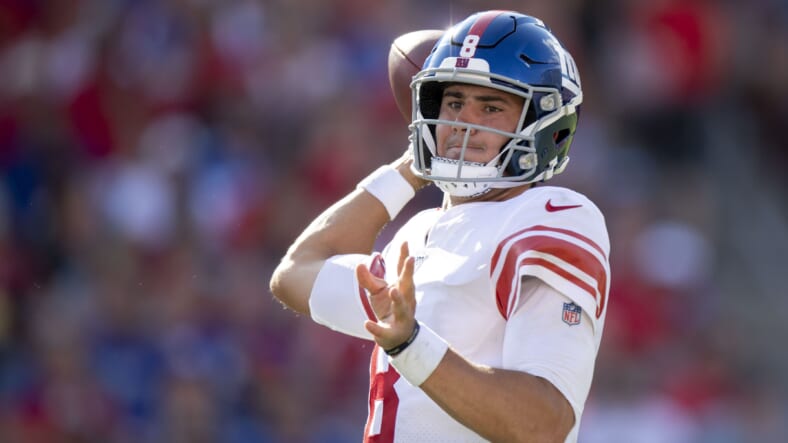 When the New York Giants drafted Quarterback Daniel Jones with the No. 6 overall pick last April, many questioned the selection. The majority of fans wanted a different QB, Dwayne Haskins, a 6’4″ gun-slinger from Ohio State. Haskins, who started 14 games for the Buckeyes in 2018, was the clear-cut No. 2 QB in the draft according to many. So when the Giants took Daniel Jones, a player who threw only two more touchdowns in three seasons than Haskins threw in one, it looked as though Big Blue had made a mistake. But through week seven of this season, it looks as though the Giants actually made the correct selection. Haskins’ struggles and Jones’ success are proving that the Giants made the right choice at QB, and here’s why:

How Dwayne Haskins’ Struggles and Daniel Jones’ Success have Proved the Giants Made the Right Choice:

Haskins has appeared in two games this season, neither of them being starts. In those two games, he has thrown for 140 yards, completed 54.5% of his passes, and tossed four interceptions. He has a passer rating of 36.4, the lowest of any player with at least 20 pass attempts. He is yet to throw or run for his first NFL touchdown. Nothing has been going well for the No. 15 overall pick in last year’s draft.

As mentioned above, Haskins has not made a start for Washington yet. This is another red flag, as it brings to question if he was even ready to make the jump to the NFL. On a team that boasts Case Keenum as the starting QB, it doesn’t take much to earn the keys to the offense. It is clear Haskins still has a great amount of work to do before he is ready to be a starting QB in the NFL.

Jones took over the offense in week three when he was named the starter. Since that day, he has shown flashes that the Giants might have chosen the best QB in the 2019 draft. Through five games, he has thrown for 1,144 yards, completed 61.1% of his passes, and has accounted for eight total touchdowns.Â  He has also made a number of mistakes though, including seven interceptions and six fumbles. Yet during every game, he makes multiple plays that prove he is on the path to being a franchise quarterback.

The Giants were under fire when they selected Jones before Haskins last April. But to this point in their respective careers, it is clear that not only Jones is the better player, but that the Giants made the right choice by taking him over Haskins.