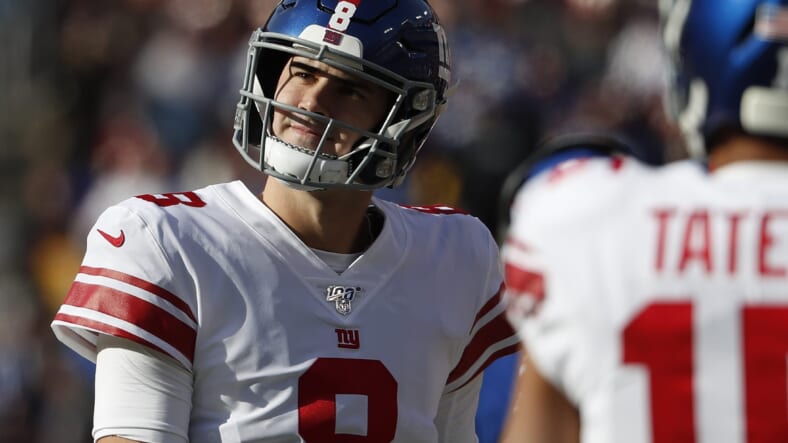 The pressure is on for New York Giants‘ quarterback Daniel Jones through four weeks of the regular season. Having only thrown two touchdowns this year, the turnovers are beginning to bubble and pose a significant problem. Over the past four weeks, Jones has made three significant mistakes that have played a part in the team’s 0-4 record.

Against the Pittsburgh Steelers, Jones waited too long to get rid of the ball and was hit by Bud Dupree, throwing an unfortunate interception which ended the game prematurely. In week 2, he marched downfield and threw a poor pass to Golden Tate before the enzone with the game on the line. Against the Rams in week 4, Jones tossed a pass on the move to Damien Ratley that was intercepted when he had daylight ahead of him to take off running.

These mistakes cannot continue to linger, as Jones has the tangible talent to become an effective quarterback in the NFL. Of course, blame can be put on the pieces around him, as the offensive line ranks near dead last in pass protection and Jones is currently the team’s leading rusher.

However, he does understand the improvement is necessary and nothing is given in the NFL.

“I realize that this is my second year and I do have a lot to learn … but I don’t think you ever use that as an excuse. I’m expected to play well.”

“I’m expected to play well, to understand what we’re trying to do, and execute it.”

“I think the offense has the capability of being explosive.”

Jones is right, this is his second year and he has plenty to learn, but his progression must start to shine through soon. With GM Dave Gettleman undoubtedly on the hot seat, Jones could also be a casualty of war if Gettleman is replaced. Similar to what we saw with the Arizona Cardinals and Kyler Murray, new management can shake things up and go in different directions.

The Dallas Cowboys in week 5 offer a weaker defense, as they currently have the worst unit in franchise history through the first four games of a regular season. They’re allowing an averaged 36.5 points per game, providing Jones with a stellar opportunity to erase the bad juju from the fan-base.