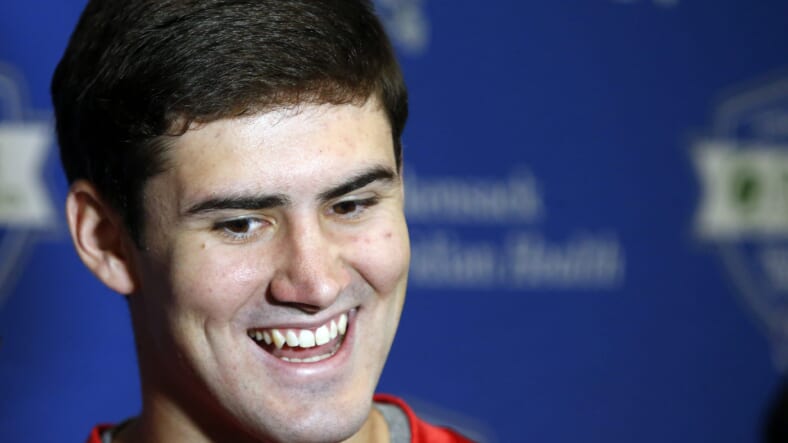 Analysts might be getting more positive about New York Giants quarterback Daniel Jones, but it’s going to take more to convince the average fan that the team made the right decision with the sixth pick when they took Daniel Jones controversially over other players such as edge rusher Josh Allen and higher rated quarterback Dwayne Haskins Jr., the latter of whom may just end up becoming another star quarterback in the same division as the Giants with the Washington Redskins.

It’s going to take good play on the field to win Jones over, rather than just offseason hype. That became painfully clear when Jones showed up at a Yankees game and received the same treatment that many have gotten from the Yankee Stadium crowd: boos. However, the rookie quarterback doesn’t seem shaken up by the incident.

“I certainly donâ€™t pay a whole lot of attention to it…” Jones told the Rich Eisen Show. “Iâ€™m focused on what we are doing here and trying to practice as well as I could these last six weeks and show some progress. At the end of the day, Iâ€™m grateful to be part of this franchise and get this opportunity. Iâ€™m looking forward to keeping it going.”

Jones also talked about the competition in training camp, but claims that he wasn’t told that he could start this year – something which realistically is an extreme longshot, even if plenty of rumors continue to fly around about it. “No one has said anything like that. Weâ€™re just trying to do all we can to make sure this team is ready to play in August,” explained Jones.

Chances are, the matter of the 6th overall pick this year and whether or not the player selected with it is worth it or not won’t be settled within this year or maybe even next year… Whether General Manager Dave Gettleman, who is responsible for originally making the pick, is still in his position by the time we find out what the Giants are really getting with Jones is something that remains to be seen.