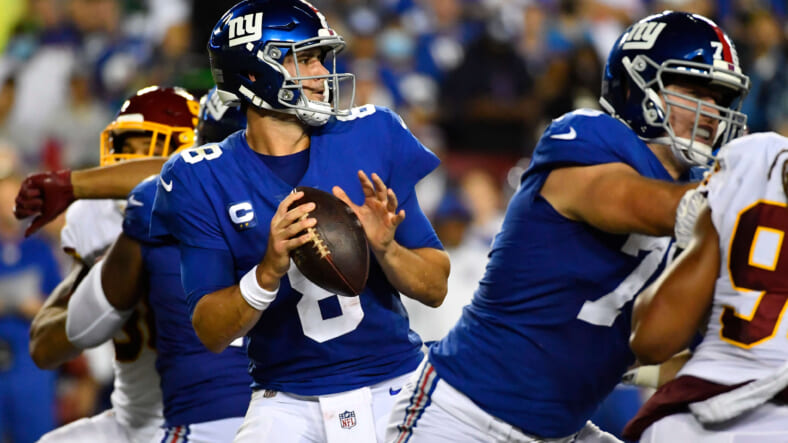 The New York Giants suffered a demoralizing loss to the Washington Football Team on Thursday Night. The fanbase is down in the dumps and nearly every takeaway is negative. However, there is one glaring spotlight in the middle of this dark shadow: Daniel Jones.

Daniel Jones was dialed in last night and turned in arguably the best single-game performance of his NFL career so far. This was encouraging considering the mediocre level of play the Giants got out of their quarterback in Week One. Jones was dealt plenty of criticism after the season opener and responded with authority in Week Two.

According to Pro Football Focus, this was by far the best game of Daniel Jones’s career. The third-year quarterback seemed to come into his own against his division rivals on primetime.

New York Giants quarterback Daniel Jones earned an elite grade from Pro Football Focus for his Week Two performance. While his box score stat-sheet might not be too crazy, it does not tell the full story. Jones threw for 249 yards and 1 touchdown with a 69% completion percentage. The box score, however, does not take into account the dropped passes that Danny Dimes delivered on target.

PFF gave Daniel Jones the best grade of his career (91.3) in Week 2 and itâ€™s not particularly close. Jones was also the highest-graded player on Thursday Night Football with that 91.3 overall grade. Such a high-graded performance might land Daniel on PFF’s Team of the Week after the Sunday-Monday games finish.

Also according to PFF, Daniel Jonesâ€™ average depth of target was 11 yards in Week Two. This ADOT would have been the highest amongst all NFL quarterbacks in Week One (excluding Jordan Love). Daniel Jones and the Giants’ offense played mightily conservative in Week One and seemed reluctant to throw the ball downfield. But, in Week Two, Daniel Jones played with much more aggression, from which the Giants’ offense benefited greatly.

This game gave the Giants a glimpse of what Daniel Jones could become. The team hopes he proves to be a franchise quarterback. If Jones can play like this on a consistent basis, he might prove to be what the Giants hope he is. He also led the team with 95 rushing yards and 1 rushing touchdown on 9 carries. Daniel Jones carried the Giants’ offense in the best game of his career despite a heart-breaking last-second loss.