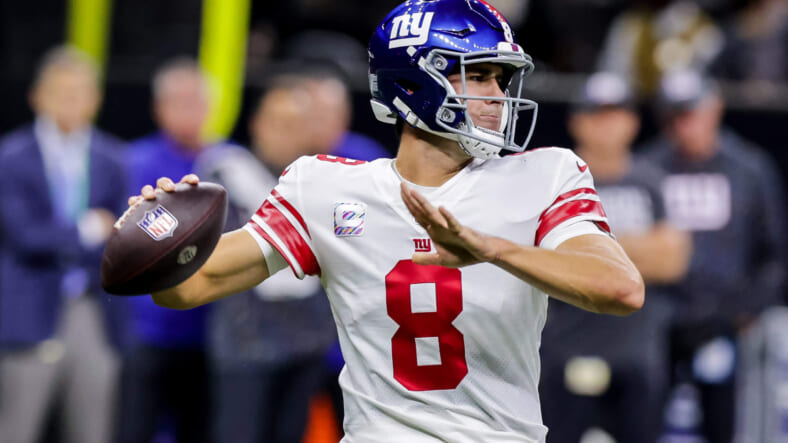 The New York Giants came up with a better performance on both sides of the ball in week 7, and one play in specific sums up their improvement on offense. That play is the trick play where wide receiver Dante Pettis tossed the ball to Daniel Jones for a first down on a scoring drive.

The play is an example of the coaching staff coming up with more creative approaches to the offense compared to earlier in the season, when there were many complaints about the “three downs for 10 yards” style of playcalling.

After the game, Daniel Jones himself was naturally asked a few questions about his first career reception.

“Yeah, it was a pretty unathletic route getting out there, so he put it out there for me and I just tried to pull it in. Good play, good design, something weâ€™d worked on all week. Good throw by Dante,” Jones said in the postgame press conference.

From what Jones said, it seems like the Giants had this play in the works during the week leading up to the game.

“I think thatâ€™s the biggest thing is going through the same process you did all week through the play, recognizing the look weâ€™re getting and trying to execute it like we practiced. Just trying to do that.”

The Giants had 302 total yards of offense against the Panthers.

While that isn’t the biggest increase on paper from their 261 against Los Angeles, the players obviously did a much better job this week converting at the right moments and turning the yardage into points.

The Giants face an interesting matchup next week when they take on the struggling Chiefs on the road, but if week 7 and this trick play are anything to go by, they’ll at least have a fully healthy Daniel Jones for that game.