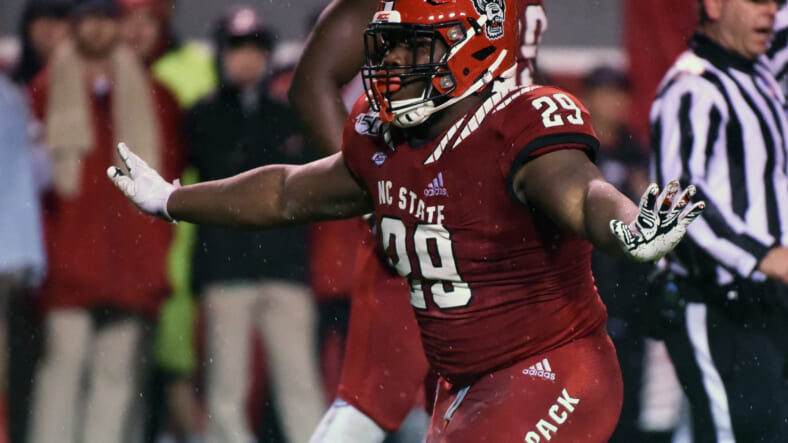 The New York Giants had a phenomenal offseason. They spent big money and landed top free agents like Kenny Golladay and Adoree’ Jackson to fill huge positions of need. Kyle Rudolph was another great addition that the Giants made in free agency.

While New York managed to add a lot of talent this offseason, they did also lose a crucial piece of their defense. Dalvin Tomlinson walked in free agency, signing with the Minnesota Vikings, leaving a hole on the Giants’ defensive line. Tomlinson was one of the Giants’ best defenders over the past four years. Now, they will need to replace the four-year starter.

Run-stuffing interior defensive linemen are a dime a dozen. But interior defensive linemen that can rush the passer and possess great athleticism are a little rarer. NC State’s Alim McNeill is a rare prospect. He’s a big boy, playing his 2020 season at 340 pounds. But he has some sneaky athleticism to his game. Check out this video of McNeill hitting 18 miles per hour on a treadmill:

Hit 18 he caught it too late ? pic.twitter.com/LR7Ja2zR5k

Empire Sports Media was fortunate enough to speak with Alim “Dream” McNeill in an exclusive interview this month. Right now, McNeill said he is 319 pounds, the weight he plans on playing at in the NFL. This will give Alim positional flexibility. When we asked him about his defensive alignment at the next level, Alim said he is “comfortable in all the positions on the D-Line, whether itâ€™s the 0, 1, 2i, 3, 4i, whatever it is.”

McNeill primarily played nose tackle/0-tech at NC State. The Giants just lost their nose tackle, Dalvin Tomlinson, in free agency. Alim McNeill makes a lot of sense for the Giants as a replacement. He is a talented defensive line prospect that can stuff the run and provide the added bonus of being an explosive pass-rusher.

Alim McNeill posted 10 sacks through 32 career games and, according to Pro Football Focus, had a 9.3% pass-rush win rate, far above the draft class average from his position.

Alim’s run-defense grade via PFF was 92.1 with a 77.5 pass-rushing grade. He has the ability to make plays in both facets of the game. If he is on the board in the second or third round, the Giants should greatly consider drafting Alim McNeill. As an added bonus, McNeill did mention in his interview with ESM that he “would love to be a Giants!” Giants fans would love to have Alim McNeill, a smart, young, explosive defensive lineman that can make plays against the run and the pass.