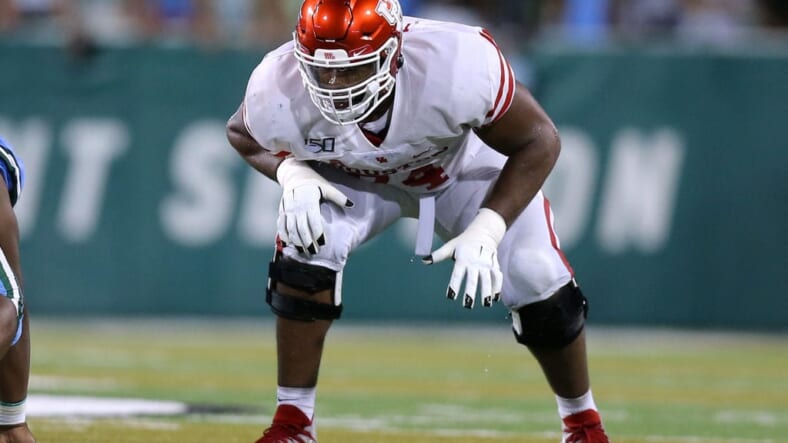 NEW ORLEANS, LOUISIANA – SEPTEMBER 19: Josh Jones #74 of the Houston Cougars in action during a game against the Tulane Green Wave at Yulman Stadium on September 19, 2019 in New Orleans, Louisiana. (Photo by Jonathan Bachman/Getty Images)

The New York Giants‘ offensive line has been among the worst in the league for the past couple of seasons. Kevin Zeitler was a huge addition to the Giants’ offensive line in the 2019 season. However, Nate Solder and Mike Remmers havenâ€™t provided that same steady performance.

Solderâ€™s 57 pressures allowed this season are seven more than any other player in the NFL. Solder and Remmers 97 combined pressures allowed was the most in the NFL this season (PFF). The Giants needed to address the problem of the struggling offensive line in this year’s NFL Draft and they certainly made improvements after the first round last night.

With the fourth overall pick, the New York Giants selected Andrew Thomas, OT, Georgia. Thomas is an absolute freak of nature! Standing at 6’5″,Â  and weighing 315 Ibs, a very agile big man who has quick feet and can run and pass block against the best of the best as he did in his collegiate carrier. Thomas was no doubt the best and most pure left tackle in the draft class. This draft choice was a huge win for the Giants, giving Daniel Jones more time in the pocket, and opening up running lanes for Saquon Barkley!

What the Giants should do tonight :

The Giants hold the 36th overall pick in the second round of the NFL Draft. There is still so much talent on the board. New York can’t go wrong with drafting a guy like Antoine Winfield the safety from Minnesota, or Zack Baun the linebacker from Wisconsin.

The Giants could stack their offensive line by drafting Josh Jones, (OT) from Houston. Jones is another freak of nature who could potentially fill the need at right tackle for the Giants. Jones, like Thomas, is 6’5″, 319 Ibs, and is very quick out of his stance when asked to pull block. Jones does a great job of reaching the second level of blockers and improved tremendously as his season went on. Jones went from a second-round pick who would need more time to develop, to a day one starter and a potential first-round pick.

Josh Jones has excellent lateral-slide smoothness to handle mirroring duties. He is able to get to difficult reach blocks on the play-side and back-side. Both Thomas and Jones have experience at left tackle and right tackle. If Jones is drafted by Giants, expect to see the two switching sides to throw defenses for a ride. Jones may not have the footwork like Thomas does, but he makes up for it with his pure athleticism.

What The Giants should do with Nate Solder:

It’s going to be interesting to see what the Giants do with Nate Solder if they go offensive tackle in round two. The Giants could look to trade Solder for draft capital, but the problem is, who wants the guy? Solder had a season to forget in 2019 and is losing value. He allowed 11 sacks which were the second-most in the NFL this year. Jones could sit behind Solder for a year and develop, but it might be best for the Giants’ to start him from day one.

The New York Giants have a chance to fix their offensive line struggles and build a line that can be set and stone for the next seven to eight years. Adding Andrew Thomas and, hopefully, Josh Jones, will create an amazing pocket for Danny Dimes to throw the ball, and also give star running back Saquon Barkley the holes and lanes he’s been seeking for the past two seasons. For these reasons, if he manages to fall to pick thirty-six, the Giants should draft Josh Jones.