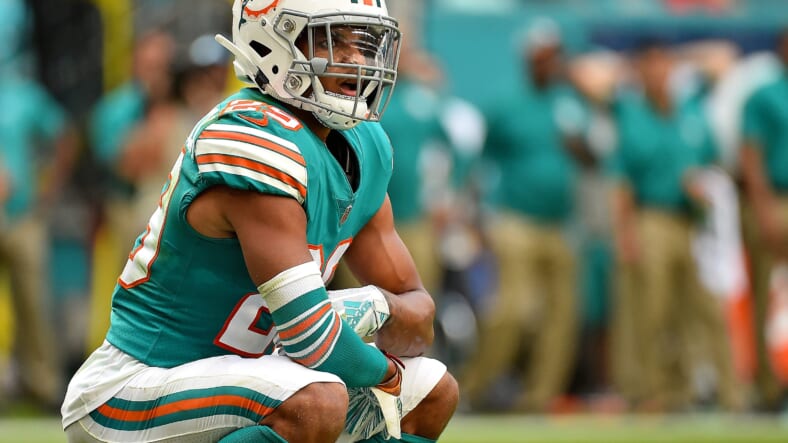 After a significant defeat to the Dallas Cowboys in week one of the regular season, the New York Giants could look to make a trade, in an attempt to bolster the secondary.

With rookies plastered across the defensive backfield for the Giants, they are in dire need of support, which is where Miami Dolphins safety, Minkah Fitzpatrick, comes in to play.

Fitzpatrick requested a trade from the Dolphins after a blowout loss to the Baltimore Ravens last week. It was reported that several players on Miami requested to be traded, and Fitzpatrick, a former first-round pick, is one of them.

What would it cost for the New York Giants to trade for Minkah Fitzpatrick?

It has been reported that the Dolphins will seek a first-round pick in a potential deal for the safety. He was being utilized as a Swiss Army knife on the defense, playing slot cornerback and safety. However, he wants to stick to one position, and slot corner seems to be his strong suit.

The slot position is becoming more valuable in a league with quicker and more agile wide receivers. The Giants lack a star at the spot and could use Fitzpatrickâ€™s abilities immediately. Ultimately, it comes down to his value and what the Giants would be willing to part with in terms of draft capital.

By no means should the Giants consider trading their first-round pick away, believing it will likely be a high one and they need pass-rush help.

Defensive coordinator James Bettcher could use Fitzpatrick in many different ways, but he would likely utilize him in the slot position and extract the most value out of his skill set. Heâ€™s an incredibly talented defender that trends towards the top of PFFâ€™s slot CB grades.

What PFF has to say about Minkah:

And Fitzpatrickâ€™s slot success in the NFL is merely par for the course.

In his three-year career at â€˜Bama, Fitzpatrick played a majority (66.3%) of his defensive snaps at slot cornerback and, much like his debut NFL season, played his best football at the position. His 90.5 coverage grade in the slot is currently the highest ever recorded among the 93 Power 5 defenders with 400 or more slot coverage snaps in the PFF College era (2014-18). He was truly in a league of his own playing slot cornerback at the college level, allowing just a 67.2 passer rating and 0.90 yards per coverage snap across a whopping 872 slot coverage snaps and 145 targets.

Overall, he would be a massive addition to a Giants team lacking an inside corner, but his price-tag could be too high. The Fins could falter and accept a lower bid, though, but we can only estimate they will not accept anything less than a first-rounder.