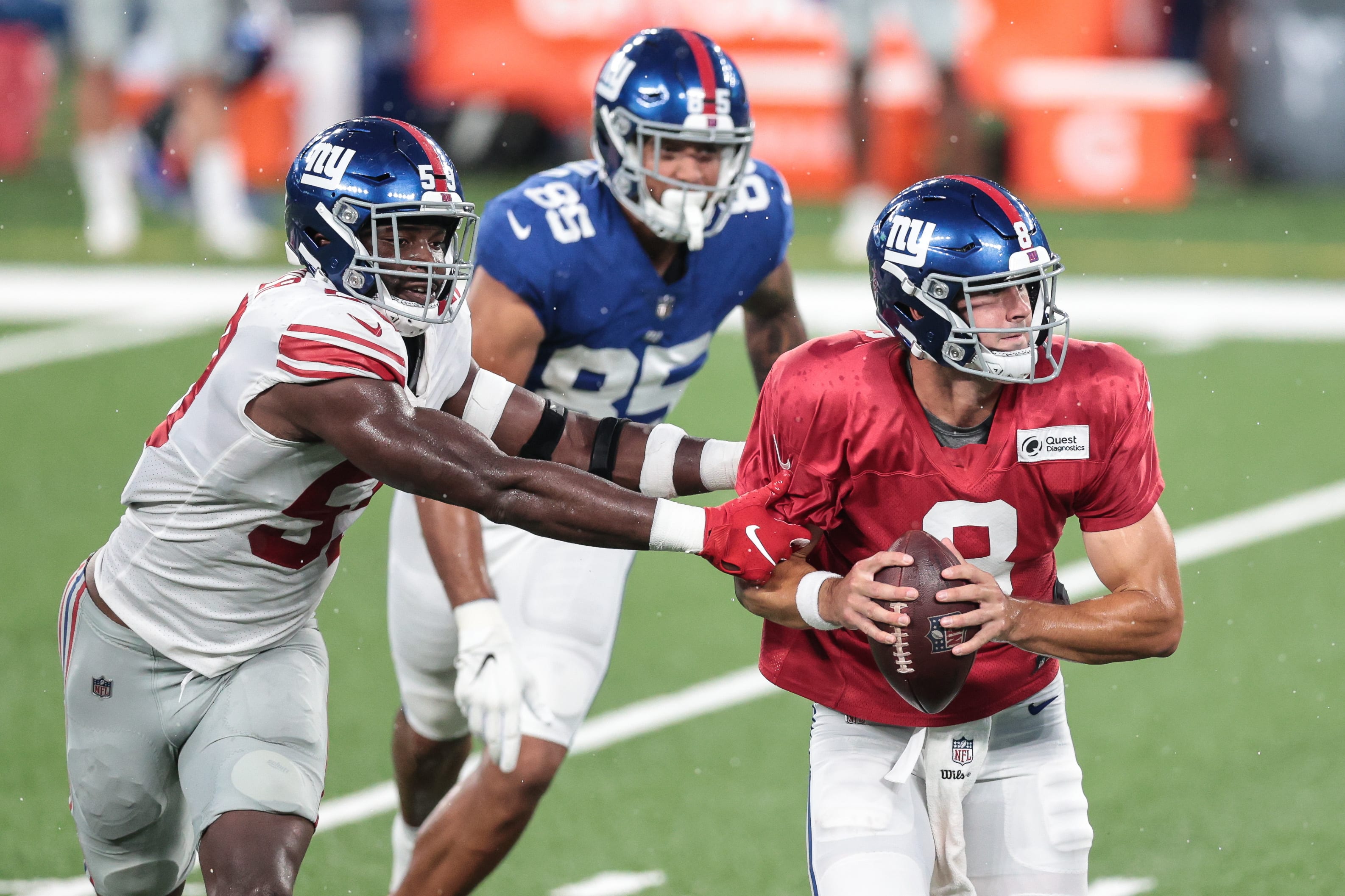 The 2020 NFL season kicked off today after a long, tumultuous offseason. Almost every team played on Sunday, but four teams remain unplayed heading into Monday night. The Denver Broncos and Tennessee Titans will face off on Monday, as well as the New York Giants and Pittsburgh Steelers.

The Giants are the underdogs in their Week One matchup. They are hosting the rugged Steelers defense at home while installing brand new offensive schemes. For New York, the key to winning their first game of the 2020 season is to play turnover-free football.

Jones Can Not Fumble

The Pittsburgh Steelers possess one of the best defenses in the NFL. In 2019, Pittsburgh led the NFL with 38 forced turnovers. The Steelers intercepted 20 passes (second-most) while holding opposing quarterbacks to only 3,113 passing yards (third-best).

The Giants will have a tough time airing out the football in Week One. The Steelers’ secondary is loaded with playmakers, but they also have the best pass-rush in the NFL. Pittsburgh sacked opposing quarterbacks a league-high 54 times last season. Their 30.5% pressure rate also led the NFL.

Pittsburgh’s incredible pass-rush is led by First-Team All-Pro TJ Watt. JJ Watt’s younger brother was dominant in his third professional season. Last year, TJ put together an insane 14.5 sack performance along with 8 forced fumbles and 2 interceptions. Watt is a versatile talent that forces turnovers with ease and impacts both the run and pass games.

There are other pass-rushers on the Steelers’ defense who pose a serious threat to New York’s new offensive line. Opposite of TJ Watt is Bud Dupree, an edge rusher who totaled 11.5 sacks and 4 forced fumbles last season. Those are two talented edge rushers on the Steelers’ defense, but there is also a pretty dominant rusher on Pittsburgh’s interior. Cameron Heyward was also a First-Team All-pro, as he totaled 9 sacks and 1 forced fumble in 2019.

Daniel Jones struggled to hold onto the football last season. As a rookie, Jones fumbled 17 times in 13 starts. This is something that Danny Dimes needs to improve on to take that step forward as a franchise quarterback in 2020. With such fierce pass-rushers who force so many fumbles all over the Steelers’ defense, it is crucial that Daniel Jones keeps the ball off the turf.

Daniel Jones struggled with fumbles last year, but he kept his interception number down for the most part. But as great as the Steelers’ pass-rush is, their secondary is phenomenal, too. That unit is led by third-year superstar Minkah Fitzpatrick.

Fitzpatrick is another Steelers player coming off of a 2019 First-Team All-Pro campaign. Minkah intercepted 5 passes last season and forced 2 fumbles. Fitzpatrick also scored 2 defensive touchdowns. He is a turnover machine that must be avoided by Daniel Jones and the Giants’ offense.

The Steelers’ secondary also features veteran Joe Haden and Steven Nelson. The Steelers are bound to force turnovers all season long, but if the Giants can play turnover-free football in Week One, they can keep themselves in this game. 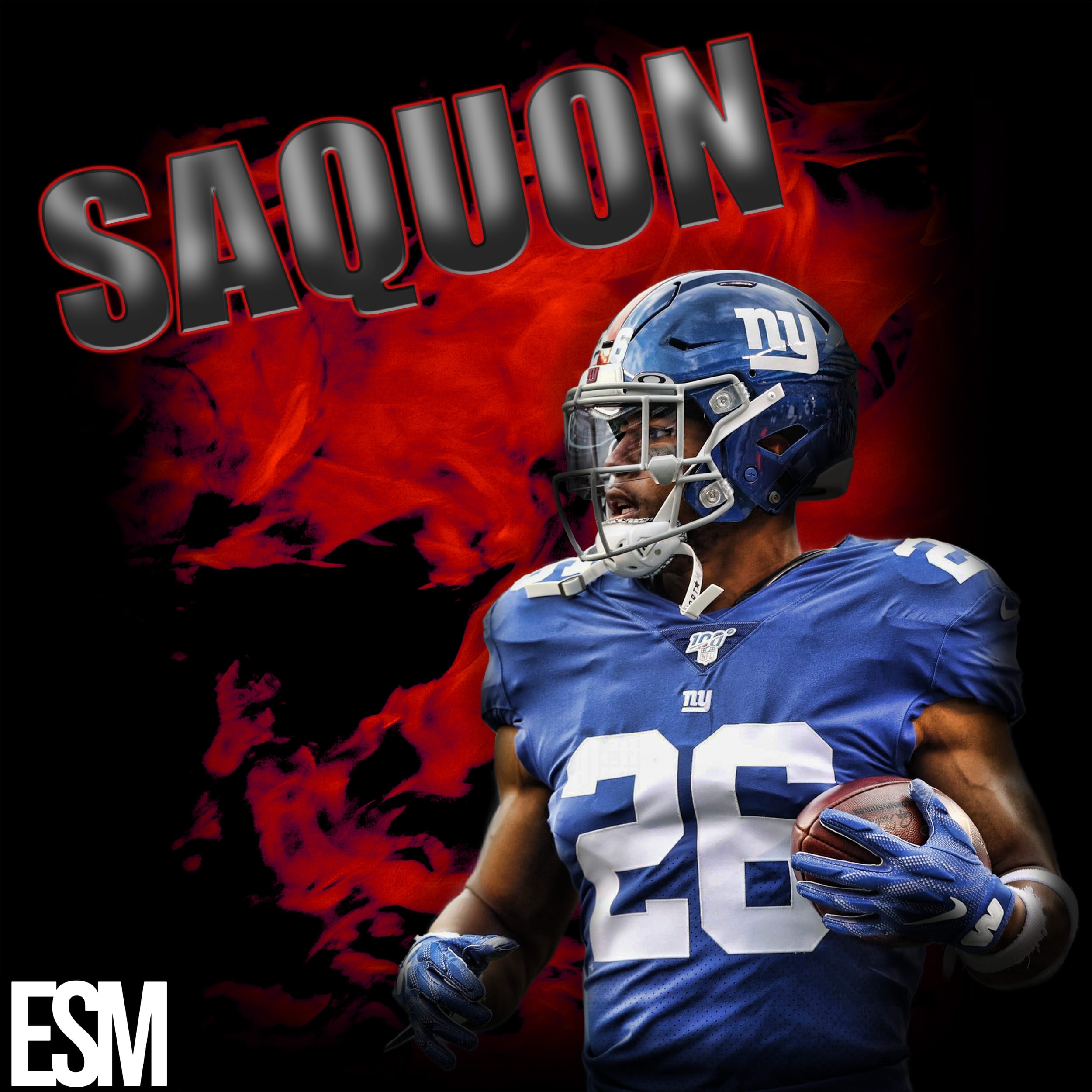 The New York Giants are about to face off against arguably the best defense in the NFL on Monday night. The Pittsburgh Steelers’ defense led the league in forced turnovers last season. The Steelers’ defensive unit features three 2019 First-Team All-Pros and other Pro Bowlers littered throughout.

The Steelers have the best pass-rushing duo in the NFL in TJ Watt and Bud Dupree. The two combined for a total of 26 sacks in 2019 and 12 forced fumbles. Safety Minkah Fitzpatrick also totaled 5 interceptions and 2 forced fumbles playing alongside Pro Bowl cornerback Joe Haden. Throwing against this secondary and pass-rush will be a true test for Daniel Jones entering his second NFL season.

For this reason, the Giants need to rely on their best player more than usual in Week One. Saquon Barkley, arguably the most talented running back in the NFL, is the key to success for the Giants on Monday night.

Saquon Barkley had an up and down season in 2019. He spent much of the season either on the sideline, nursing an injury, or on the field playing through that injury. When healthy, Barkley was his dominant self, but the Giants’ offense still struggled to use him in an efficient manner.

Entering 2020, Saquon has a brand new offensive line and coaching staff to help him find success. In Week One, Saquon Barkley needs to be fed the ball abundantly in order for the Giants to win. This is not a defense that teams want to air the ball out on. They have playmakers in the secondary and relentless pass-rushers in the front seven. Daniel Jones should not shoulder the load for New York this week.

While the Steelers’ defense allowed the third-fewest passing yards in the NFL last season, their run defense ranked 14th in the NFL, which is still above average, but not dominant like their pass defense. If the Giants want to take down this suffocating Steelers’ defense, they need to control the clock by pounding the rock with Saquon Barkley. 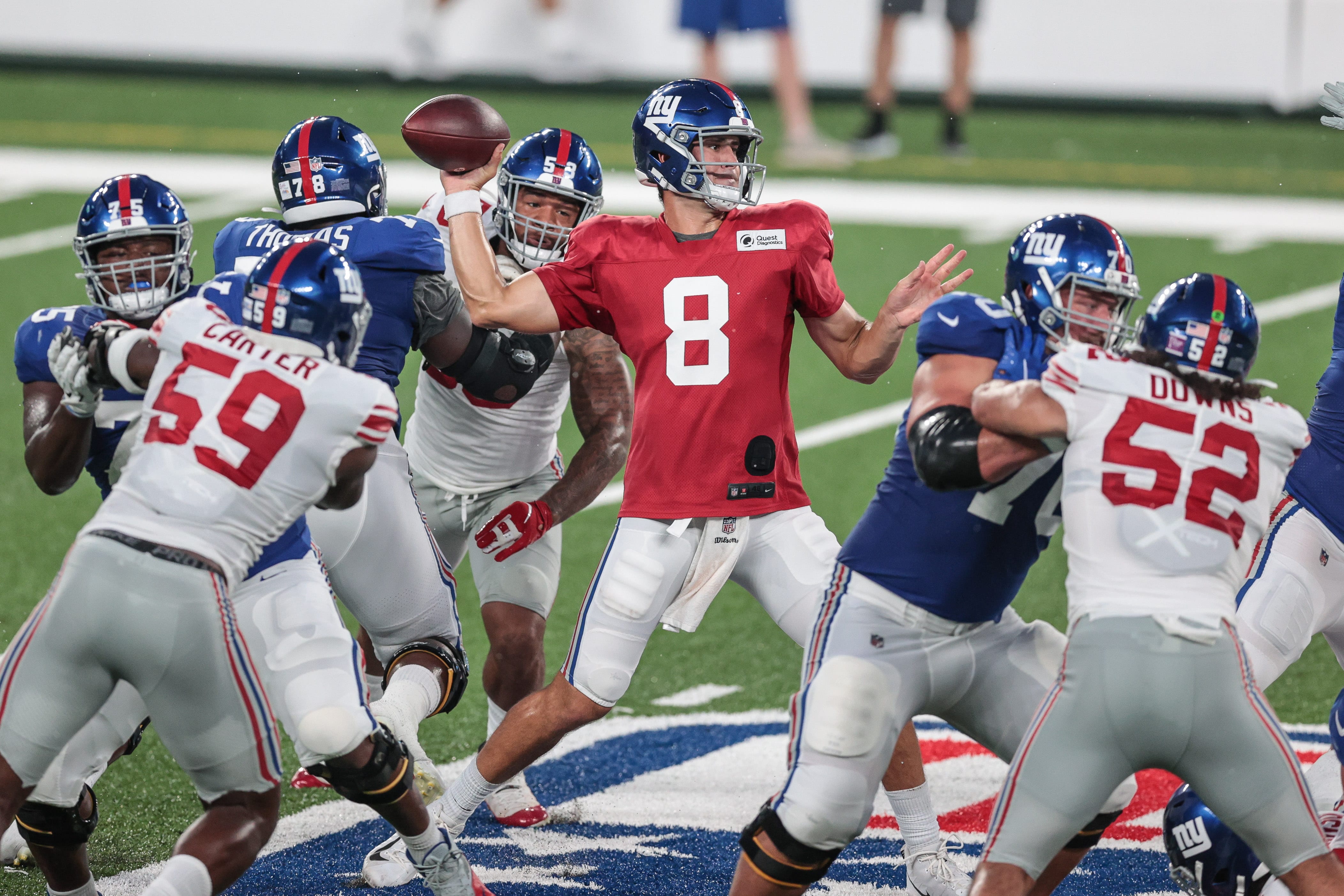 The New York Giants will play their first regular-season game of the 2020 NFL season next Monday. The Giants will host the Pittsburgh Steelers in this highly-anticipated Week One matchup.

Giants quarterback Daniel Jones is entering his second NFL season, coming off of an impressive rookie campaign. As impressive as Jones was as a rookie, he made plenty of mistakes. There were peaks and valleys for the Duke alum, his biggest flaw being his fumbling issue. Jones fumbled the ball 18 times in only 13 games (one game being one drive that ended in a fumble).

The Giants did everything they could do fix this problem this offseason. They hired an excellent quarterbacks coach in Jerry Schuplinski, a wise offensive coordinator in Jason Garrett, and totally revamped the offensive line. Additionally, Daniel Jones worked hard himself to improve his ball security, even adding nine pounds of muscle.

All eyes will be on Daniel Jones during the Giants’ primetime matchup with Pittsburgh. Daniel will go up against a tough Steelers defense that will challenge him and put him to the test to start his sophomore season.

The Pittsburgh Steelers had the NFL’s sixth-ranked defense in 2019. They forced a league-high 38 turnovers last season. In order for the Giants to win this game, they need to keep the ball out of harm’s way.

There are a few playmakers on that Pittsburgh defense. T.J. Watt and Minkah Fitzpatrick are the two biggest standouts. In 2019, T.J. Watt was a first-team All-Pro, as he had a career-year in his third professional season. Watt played in all 16 games, racking up a dominant 14.5 sacks and a league-high 8 forced fumbles.

Watt’s knack for poking the football loose is troubling news for Daniel Jones and the Giants’ offense. New York needs to slow down T.J. Watt if they want to start the season off with a win. The best fumble-forcing edge rusher in the NFL is going up against the most fumble-prone quarterback. This could be a recipe for disaster if Daniel Jones does not demonstrate the improved ball security that has been promised.

Minkah Fitzpatrick is the other turnover machine on the Steelers’ defense. In 2019, the Steelers acquired Fitzpatrick via trade with the Miami Dolphins. Minkah started 14 games for the Steelers and was an absolute ballhawk. Minkah forced 6 turnovers in 2019, including 5 interceptions and 1 forced fumble. He even scored 2 defensive touchdowns, one on a pick-six and the other off of a recovered fumble.

Interceptions were not a huge problem for Daniel Jones in his rookie season. Jones threw 12 interceptions, which is an average of one per game. Of course, Jones would like to lower that average further, but for a rookie, that was a respectable number.

Daniel Jones faced some tough defenses in 2019. He will face another one to kick off the 2020 season. It will be a tough test for the second-year gunslinger, but if he can protect the football, it will bode well for the team’s season. 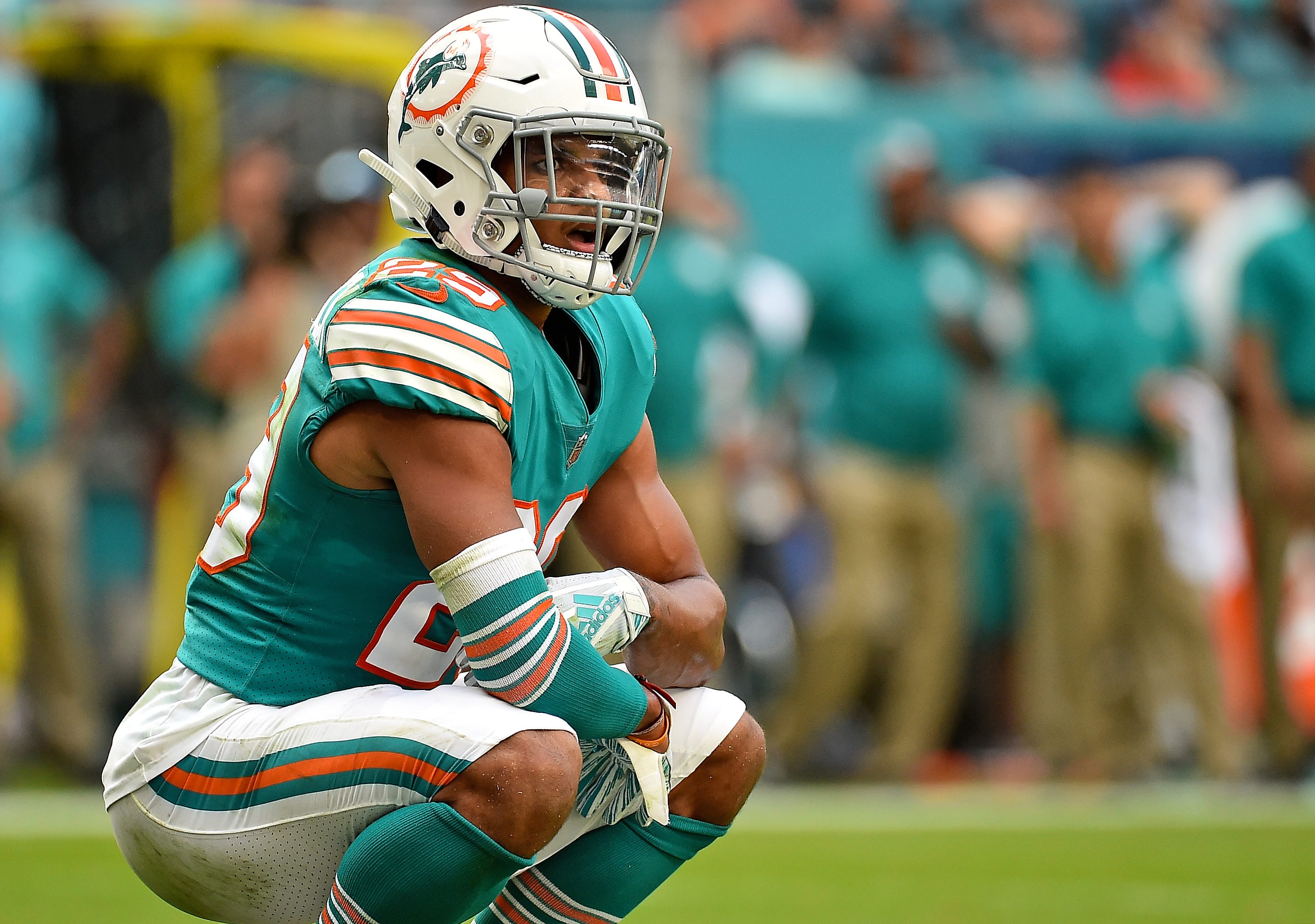 After a significant defeat to the Dallas Cowboys in week one of the regular season, the New York Giants could look to make a trade, in an attempt to bolster the secondary.

With rookies plastered across the defensive backfield for the Giants, they are in dire need of support, which is where Miami Dolphins safety, Minkah Fitzpatrick, comes in to play.

Fitzpatrick requested a trade from the Dolphins after a blowout loss to the Baltimore Ravens last week. It was reported that several players on Miami requested to be traded, and Fitzpatrick, a former first-round pick, is one of them.

What would it cost for the New York Giants to trade for Minkah Fitzpatrick?

It has been reported that the Dolphins will seek a first-round pick in a potential deal for the safety. He was being utilized as a Swiss Army knife on the defense, playing slot cornerback and safety. However, he wants to stick to one position, and slot corner seems to be his strong suit.

The slot position is becoming more valuable in a league with quicker and more agile wide receivers. The Giants lack a star at the spot and could use Fitzpatrick’s abilities immediately. Ultimately, it comes down to his value and what the Giants would be willing to part with in terms of draft capital.

By no means should the Giants consider trading their first-round pick away, believing it will likely be a high one and they need pass-rush help.

Defensive coordinator James Bettcher could use Fitzpatrick in many different ways, but he would likely utilize him in the slot position and extract the most value out of his skill set. He’s an incredibly talented defender that trends towards the top of PFF’s slot CB grades.

What PFF has to say about Minkah:

And Fitzpatrick’s slot success in the NFL is merely par for the course.

In his three-year career at ‘Bama, Fitzpatrick played a majority (66.3%) of his defensive snaps at slot cornerback and, much like his debut NFL season, played his best football at the position. His 90.5 coverage grade in the slot is currently the highest ever recorded among the 93 Power 5 defenders with 400 or more slot coverage snaps in the PFF College era (2014-18). He was truly in a league of his own playing slot cornerback at the college level, allowing just a 67.2 passer rating and 0.90 yards per coverage snap across a whopping 872 slot coverage snaps and 145 targets.

Overall, he would be a massive addition to a Giants team lacking an inside corner, but his price-tag could be too high. The Fins could falter and accept a lower bid, though, but we can only estimate they will not accept anything less than a first-rounder.