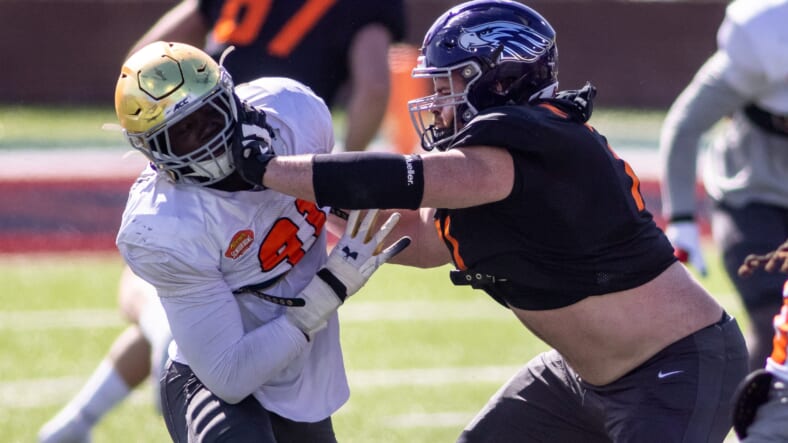 There is no question the New York Giants desperately need more offensive line support, whether it comes in the first or second round. Luckily, Big Blue has a bit of flexibility in the 2021 NFL draft after securing WR1 Kenny Golladay and a CB2 in Adoree Jackson. Acquiring a star receiver and above-average corner should help mask some of the Giantsâ€™ bigger issues, allowing them to go best player available in the draft.

Whether that means selecting Northwestern OL Rashawn Slater or star Penn State linebacker Micah Parsons, the Giants simply canâ€™t go wrong unless they take a shot at a player with a problematic injury history or fundamental problems, but I canâ€™t imagine head coach Joe Judge putting the 11th overall pick to waste.

Luckily, even if the Giants pass on Slater in the first round, there are a bevy of options in a second to consider. In fact, the mid-rounds have a few gems, including one division three lineman named Quinn Meinerz.

Meinerz shot up draft boards during the Senior Bowl, as dominating D3 athletes doesnâ€™t exactly define success at the NFL level. However, the University of Wisconsin-Whitewater standout dominated the Senior Bowl, particularly on the offensive line. At 6â€™3â€ and 320 pounds, Quinn has solid size and even trains with Slater, displaying keen strength and agility.

As a small school blocker, he has the potential to be a starting-caliber player at the NFL level at either center or guard, and we know the Giants prefer to have dynamic linemen who can shift positions if need be. With active hands and a nasty attitude, heâ€™s able to adjust to blitzers and pick up pass rushers efficiently. Most project him as a center, given his agility and ability to find work in the trenches, but he fits a power-gap scheme, which is exactly what the Giants utilize.

The New York Giants need a replacement for Kevin with upside:

After parting ways with veteran guard Kevin Zeitler and saving $12 million in cap space, the Giants will need to draft Ian OL this year, as having weapons like Kenny Golladay and Saquon Barkley wonâ€™t matter if Daniel Jones has no time in the pocket. Ridding themselves of their best lineman in Zeitler undoubtedly creates a problem, so we can fully expect them to address the position in the draft with a youth player on a rookie deal.

While Quinn might be a bit of an optimistic pick in the second round, he could be a stellar third-round selection, based on his size and upside. I donâ€™t believe heâ€™ll start immediately, but he can compete for the right guard position and will likely end up finding himself playing significant reps as the season progresses.