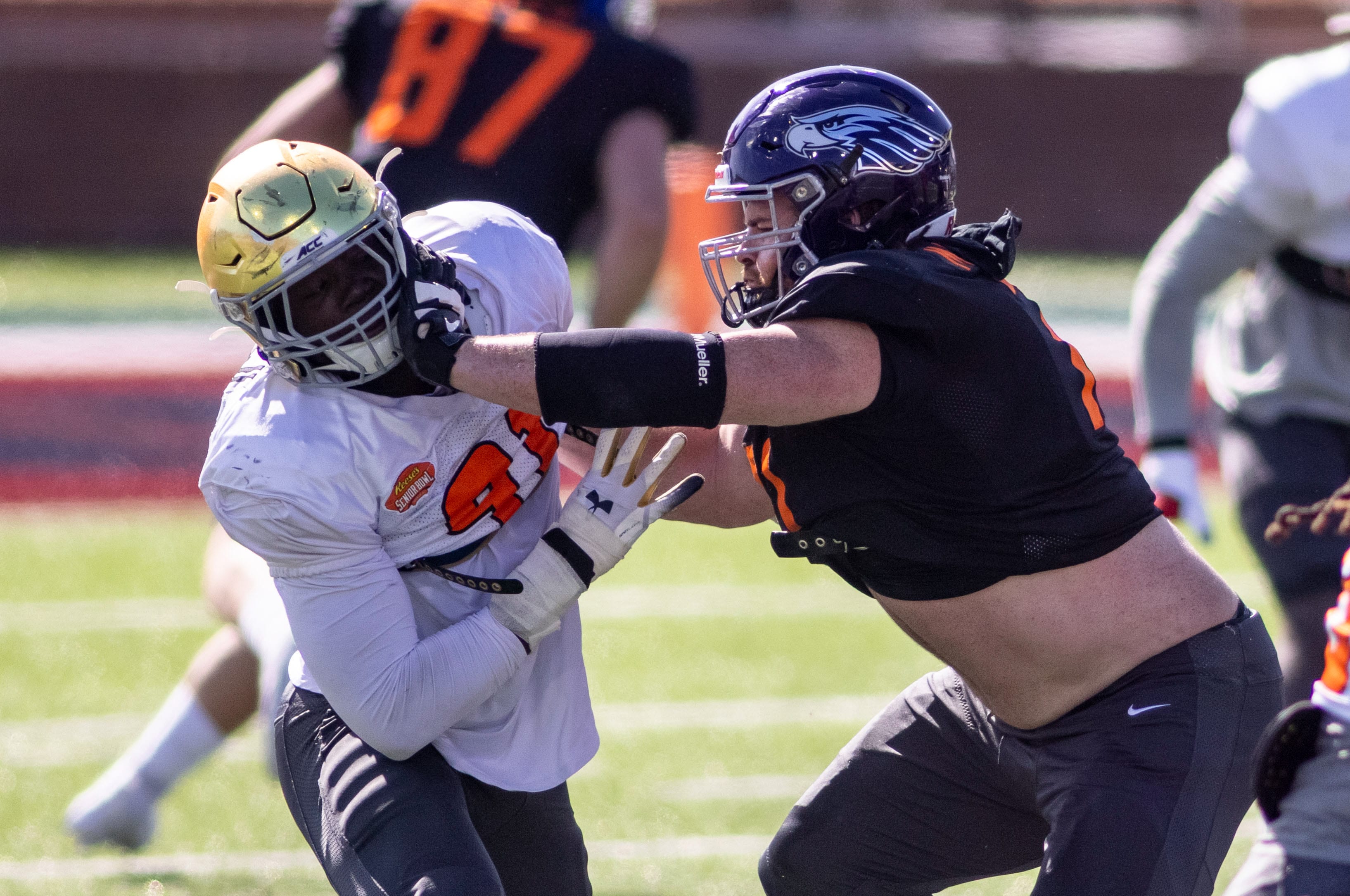 There is no question the New York Giants desperately need more offensive line support, whether it comes in the first or second round. Luckily, Big Blue has a bit of flexibility in the 2021 NFL draft after securing WR1 Kenny Golladay and a CB2 in Adoree Jackson. Acquiring a star receiver and above-average corner should help mask some of the Giants’ bigger issues, allowing them to go best player available in the draft.

Whether that means selecting Northwestern OL Rashawn Slater or star Penn State linebacker Micah Parsons, the Giants simply can’t go wrong unless they take a shot at a player with a problematic injury history or fundamental problems, but I can’t imagine head coach Joe Judge putting the 11th overall pick to waste.

Luckily, even if the Giants pass on Slater in the first round, there are a bevy of options in a second to consider. In fact, the mid-rounds have a few gems, including one division three lineman named Quinn Meinerz.

Meinerz shot up draft boards during the Senior Bowl, as dominating D3 athletes doesn’t exactly define success at the NFL level. However, the University of Wisconsin-Whitewater standout dominated the Senior Bowl, particularly on the offensive line. At 6’3” and 320 pounds, Quinn has solid size and even trains with Slater, displaying keen strength and agility.

As a small school blocker, he has the potential to be a starting-caliber player at the NFL level at either center or guard, and we know the Giants prefer to have dynamic linemen who can shift positions if need be. With active hands and a nasty attitude, he’s able to adjust to blitzers and pick up pass rushers efficiently. Most project him as a center, given his agility and ability to find work in the trenches, but he fits a power-gap scheme, which is exactly what the Giants utilize.

The New York Giants need a replacement for Kevin with upside:

After parting ways with veteran guard Kevin Zeitler and saving $12 million in cap space, the Giants will need to draft Ian OL this year, as having weapons like Kenny Golladay and Saquon Barkley won’t matter if Daniel Jones has no time in the pocket. Ridding themselves of their best lineman in Zeitler undoubtedly creates a problem, so we can fully expect them to address the position in the draft with a youth player on a rookie deal.

While Quinn might be a bit of an optimistic pick in the second round, he could be a stellar third-round selection, based on his size and upside. I don’t believe he’ll start immediately, but he can compete for the right guard position and will likely end up finding himself playing significant reps as the season progresses. 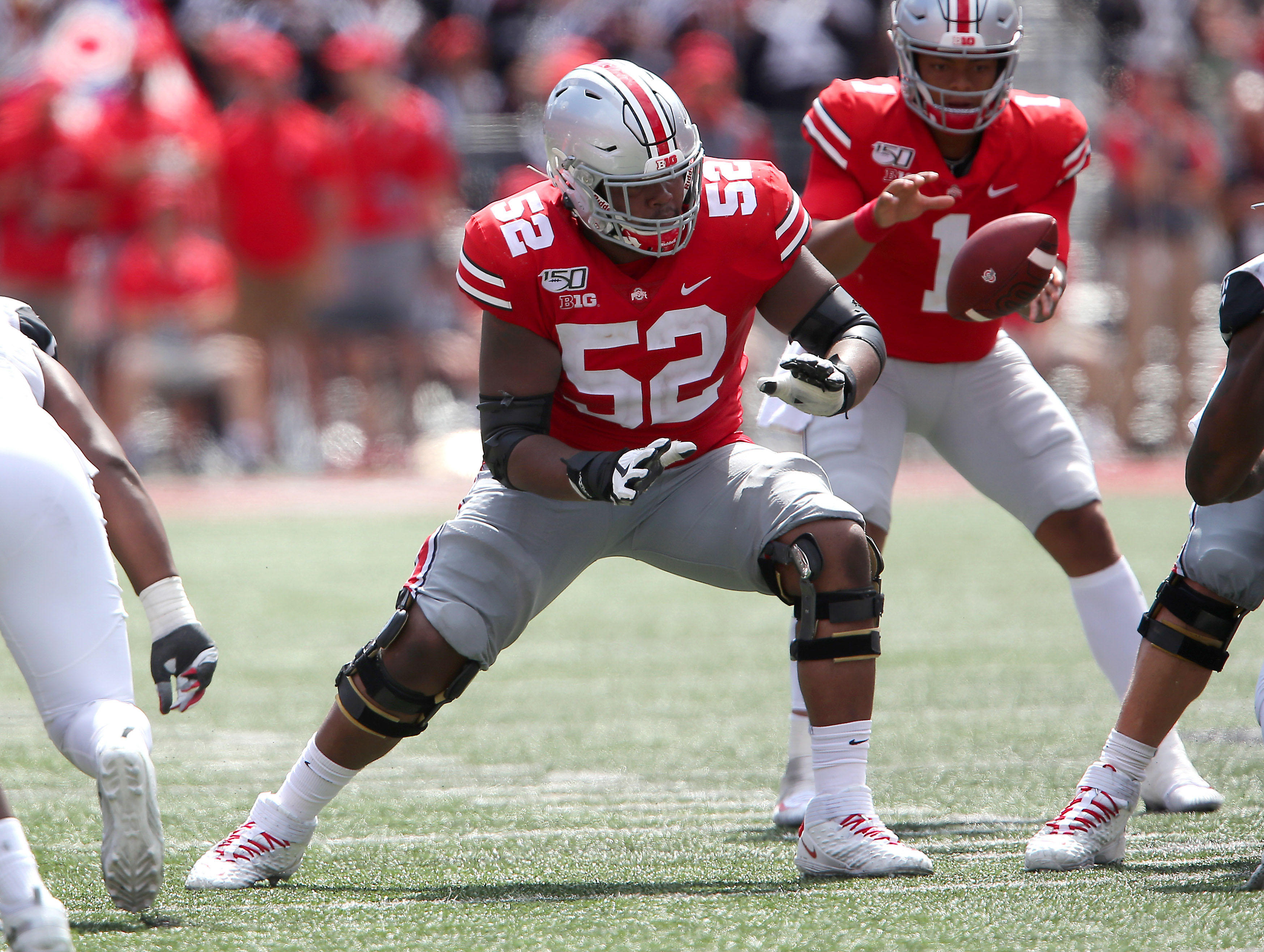 The New York Giants knocked the ball out of the park in free agency. They addressed their biggest need by signing wide receiver Kenny Golladay as their new alpha dog offensive weapon. The Giants then made another splash with Adoree’ Jackson, upgrading their second cornerback position and giving them one of the best secondaries in the NFL.

The Giants also addressed their edge rusher position, adding a couple more rotational pieces in Ifeadi Odenigbo and Ryan Anderson. But one positional weakness went mostly untouched. The Giants added one depth piece to the interior of their offensive line (Zach Fulton) but did not make a significant upgrade to the position.

The Giants’ offensive line is the biggest weakness on the roster. Their guards are unreliable and unproven. New York needs to upgrade its interior offensive line. Thankfully, the 2021 NFL Draft should provide the Giants with an abundance of IOL options in round two.

Ohio State’s Wyatt Davis is arguably the top interior offensive line prospect in the 2021 NFL Draft. If the Giants were able to land Davis in round two, they are getting an instant starter at right guard. Wyatt Davis has actually drawn comparisons to former Giants right guard Kevin Zeitler. He would be a perfect scheme fit and replacement to Zeitler for New York.

But Wyatt Davis is not guaranteed to be on the board at 42 overall. There is a chance Davis gets drafted in the back end of the first round. However, if he is there for the Giants in round two, Wyatt Davis would be a home run selection. Wyatt Davis totaled 865 pass-block snaps in his career at Ohio State. On those snaps, Davis allowed only 4 sacks and 1 quarterback hit (PFF). He is a phenomenal pass protector and a mauler in the run game. Davis could start instantly on the Giants’ offensive line.

If you want an athlete on the offensive line, then you want Creed Humphrey out of Oklahoma. Per Anthony Treash of Pro Football Focus, Creed Humphrey ran a quicker short shuttle at his pro day (4.46) than Jerry Jeudy did at the 2020 NFL Combine (4.53).

The left-handed center out of Oklahoma dominated at his Pro Day. Creed Humphrey put up ridiculous numbers, like his 5.09s 40-yard dash, his 33-inch vertical at 6 foot 4 inches, 312 pounds, and his 29 reps on the bench.

Humphrey is a premiere pass-protecting center. According to Pro Football Focus, Humphrey allowed only 28 pressures over the last three years on nearly 1,300 pass-blocking snaps. While he did play center in college, many feel as though Creed has the talent to play offensive guard at the NFL level. This could make him a great fit for the New York Giants in the second round.

One of the draft’s biggest risers this year is Wisconsin-Whitewater’s offensive line prospect Quinn Meinerz. The division-three hog molly was absolutely dominant at the 2021 Senior Bowl, sending him skyrocketing up draft boards.

Quinn Meinerz is another prospect that lit up the theoretical scoreboard at his Pro Day. Per Anthony Treash of PFF, Quinn Meinerz at his pro day surpassed the 90th percentile historically among iOL in the 40, vertical, broad, short shuttle, and 3-cone.

Throughout his collegiate career, Meinerz played offensive guard exclusively. At the Senior Bowl, he took his first reps at center and impressed every scout at the event. He did not face or competition during his playing days at Wisconsin-Whitewater, but he dominated the NFL prospects he faced at the Senior Bowl. Knowing how much the Giants enjoy drafting Senior Bowl standouts, Quinn Meinerz could be a legitimate option in round two.

Alabama interior offensive lineman Landon Dickerson tore his ACL in 2020 and missed the College Football playoffs. But he is still an intriguing option for the Giants to consider in the second round.

Dickerson is a phenomenal run-blocker, earning Pro Football Focus’s highest run-blocking grade in the SEC last season with a grade of 92.8. Landon is also incredibly versatile, a trait Joe Judge values highly. While he might be listed as a center, Dickerson is an option for the Giants because he played multiple positions in college. Dickerson logged snaps at every position on the offensive line during his time at Alabama. He played the majority of his snaps at center, but did play over 200 snaps at right guard in 2019 and could make the transition back there in the pros.

Despite his talent on the field, Dickerson is a player that many teams will avoid drafting due to his medical history. Dickerson tore his ACL as a freshman in 2019 at Florida. He then suffered a significant ankle injury in 2020 that caused him to miss nine games. Then, of course, the torn ACL in 2020. Landon has suffered a significant injury every season of his career. If he can stay healthy at the next level, Dickerson has the talent to be one of the best interior offensive linemen in the NFL.

The New York Giants have had a phenomenal free agency period. They re-signed star defensive lineman Leonard Williams and landed free agency’s top wide receiver Kenny Golladay. The Giants also seem to be on the verge of filling another need with the potential signing of Adoree’ Jackson.

New York’s biggest need entering free agency has been addressed. They added playmakers on offense in Kenny Golladay and Kyle Rudolph. If they also land Adoree’ Jackson, they will fill another significant need on defense. The Giants’ next biggest weakness to address is now their offensive line.

The Giants’ offensive line was one of the worst in the NFL in 2020. The Giants’ pass-block win rate in 2020, according to ESPN, ranked dead-last in the NFL at 46%. Their run-block win-rate ranked 18th at 70%, which is about average or slightly below. The Giants prioritized upgrading Daniel Jones’s weapons, however, maybe more than anything, they still need to fix the offensive line in front of him.

Offensive linemen to target in the 2021 NFL Draft

The Giants could potentially go offensive line in the first round now that they have added their alpha-dog playmaker, Kenny Golladay. There are a couple of intriguing names for the Giants at eleven. Rashawn Slater out of Northwestern stands out as a realistic top option.

Penei Sewell is the top offensive tackle in this year’s class. But the odds of Sewell falling outside the top-ten are slim. Rashawn Slater has a better chance of falling to the Giants at eleven for one main reason: many teams view him as a guard. Slater was a dominant offensive tackle in college that handled Chase Young better than anyone in his dominant 2019 season. But, at six-foot-three with only 33″ arms, many project Slater to be a guard at the next level.

The Giants’ biggest weakness on their offensive line is the guard position. The Giants have their left tackle of the future in Andrew Thomas. Right tackle is a question mark, but Dave Gettleman is confident in Matt Peart as a future starter. Rashawn Slater could be drafted by the Giants to compete outside with Matt Peart, but he could also move immediately inside to start at offensive guard. He has the talent and athleticism to be a day-one starter, his position is just undefined.

If the Giants draft Rashawn Slater at eleven overall, they are getting one of two things: a talented, undersized player with the potential to be a top offensive tackle OR a day-one starter and upgrade at offensive guard. Rashawn Slater would be a perfect pick for the Giants with the eleventh pick in the 2021 NFL Draft.

There are a few interior offensive linemen that stand out in the second, third, or fourth rounds of the 2021 NFL Draft. In round two, a standout name is Wyatt Davis out of Ohio State. Davis is a right guard out of OSU that draws comparisons to Kevin Zeitler.

Wyatt Davis totaled 865 pass-block snaps in his career at Ohio State. On those snaps, Davis allowed only 4 sacks and 1 quarterback hit (PFF). He is a phenomenal pass protector and a mauler in the run game. Davis could start instantly on the Giants’ offensive line.

An intriguing option in the later rounds is Quinn Meinerz, a D-3 prospect out of Wisconsin Whitewater. Meinerz dominated at the 2021 Senior Bowl, putting him on everyone’s radar leading up to the NFL Draft. Meinerz, being from a small school, is much of an unknown, but he handled everything thrown his way at the Senior Bowl and could now go as early as the second round.

Meinerz is a big-nasty mauler on the interior that the Giants could select and give a chance to develop into a starting offensive lineman.