New York Giants: Could Jason Garrett As OC Bring Amari Cooper With Him? 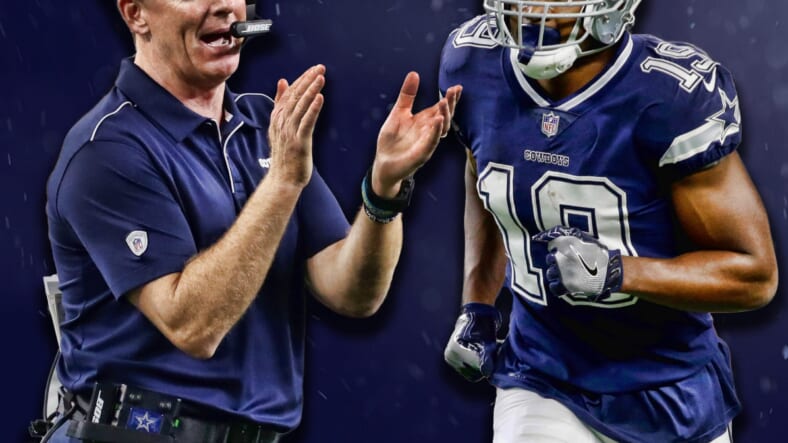 TheÂ New York GiantsÂ are heading into the 2020 offseason as a completely different team. They fired head coach Pat Shurmur and replaced him with Joe Judge. Daniel Jones, not Eli Manning, will be the team’s starting quarterback in Week 1. And, with free agency and the draft upcoming, the Giants’ roster could look drastically different.

But before the Giants can start targetting free agents and draft prospects, they need to get their coaching staff in place. New York still has yet to hire an offensive coordinator, one of the staff’s most important positions. However, there is one prominent name that the Giants are considering for the job: Jason Garrett.

The former Dallas Cowboys head coachÂ interviewed with the GiantsÂ for their vacant offensive coordinator position and he is considered to be a strong candidate. Hiring Jason Garrett would be an exceptional move, bringing a veteran coaching presence to an otherwise inexperienced staff, not to mention Garrett’s impressive track record coaching top-ten offenses.

Jason Garrett gets the most out of his quarterbacks. This would be good news for Daniel Jones as he heads into his second professional season. But Jason Garrett has also coached up a few ultra-talented receivers in Dallas. One of these receivers, Amari Cooper, is about to be a free agent. The Giants should try to arrange this reunion between the former Cowboys coach and player in the 2020 offseason.

The Dallas Cowboys are in a bit of trouble regarding their salary cap. They just paid Ezekiel Elliot and Demarcus Lawrence, and they still have not paid Dak Prescott. New head coach Mike McCarthy will have some tough decisions to make regarding the team’s impending free agents, and he might have to let some big names walk out the door.

Amari Cooper could end up being the one that got away in Dallas. The receiver out of Alabama is about to get paid in a big way. According toÂ Spotrac, Cooper has an estimated market value of $19.7 million on average annually. This is a massive contract to hand out to a wide receiver, but the Giants have the cap space to do it.

The New York Giants areÂ estimated by SpotracÂ to have over $69 million in cap space before they start trimming the fat and cutting veteran contracts. Singing Amari Cooper would put a big dent in the Giants’ cap space, but they would still have roughly $40 million left to spend.

What Amari Cooper Would Bring To The Giants

Amari Cooper is known as one of the best route runners in the NFL. He has the shiftiness to break cornerbacks’ ankles and toast them on double moves. Check out this filthy route Cooper ran to get himself open against the Eagles:

Cooper has always possessed great talent in the NFL, but they were not being utilized correctly during his time with the Oakland Raiders. This led to the Cowboys trading a first-round pick for Cooper, who then went on to tear it up in Jason Garrett’s offense.

In the 6 gamesÂ Amari CooperÂ played with the Raiders in 2018, he totaled 280 yards and 1 touchdown. After being traded to Dallas, Cooper racked up 725 yards and 6 touchdowns in 9 games. 2019 featured more of the same. Amari played in all 16 games this season and totaled a career-best 1,189 yards and 8 touchdown receptions.

Amari Cooper is a dependable primary wide receiver that creates separation as well as anyone in the league. Bringing him and Jason Garrett over to the Giants would instantly elevate the Giants’ offense into one of the most lethal groups in the league.

Amari Cooper has put on a route-running clinic this season ?