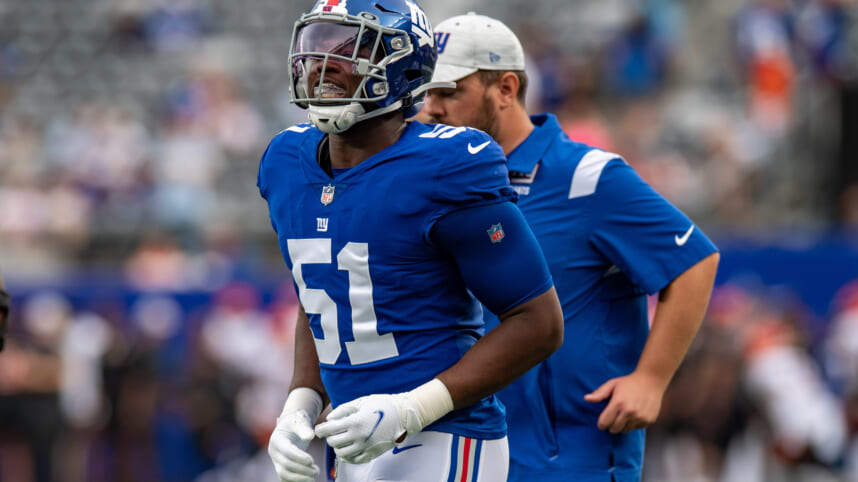 The New York Giants got a bit healthier in Week 6 against the Baltimore Ravens, returning both Leonard Williams and Wan’Dale Robinson to bolster both sides of the football. However, they are still rehabilitating several impact players, one of which is a second-year pass rusher for whom the Giants had elevated expectations for.

22-year-old Azeez Ojulari was doubtful for Week 6, but he’s expected to return in Week 7 against the Jacksonville Jaguars, a game the Giants are currently expected to lose by three points. However, getting an integral part of the defensive line back should give them the necessary boost to take advantage of a spotty Jaguars offensive line.

The New York Giants could use Azeez Ojulari for pass-rush support:

Ojulari has only played in two games this season, tallying three total pressures, including a sack and two quarterback hurries against the Chicago Bears over 30 total snaps. In his absence, Jihad Ward and Oshane Ximines have stepped up to the plate admirably, providing a solid pass rush and run defense metrics.

However, the team is still primarily focused on the pairing of Kayvon Thibodeaux and Ojulari, two young players who have the potential to be some of the best in the game. Thibodeaux made his impact felt against Baltimore, finishing the game off with a timely strip sack off Lamar Jackson, allowing the Giants to waste out the clock and emerge victorious.

Ojulari has been dealing with a calf injury, missing a second straight game. The team’s leader in sacks last season added 10 pounds of muscle mass over the summer to improve his run defense, setting the edge with power.

Calf injuries can be a fickle beast, though, so the Giants are taking a cautionary approach with Ojulari, who should be ready to go this upcoming Sunday.