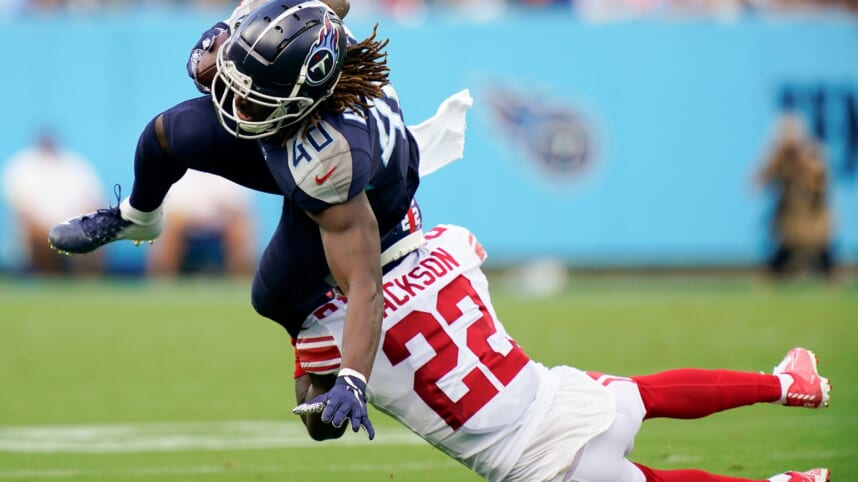 There was major concern about New York Giants quarterback Aaron Robinson and him taking over the No. 2 spot after the departure of James Bradberry this past off-season. Bradberry ended up signing with the Philadelphia Eagles, leaving a major hole alongside CB1 Adoree Jackson.

Robinson had a spotty rookie season in Patrick Graham’s system, playing only 268 total defensive snaps. Robinson dealt with a bit of injury, giving up 153 yards and one touchdown across nine games. He started in four games putting together solid performances against the Philadelphia Eagles and Los Angeles Chargers.

The New York Giants were worried about Aaron Robinson this off-season:

However, there was a legitimate reason for concern after his preseason metrics this year. In Week 1, he gave up 44 yards and a touchdown against New England’s back-ups.

Across four targets, Robinson gave up two receptions for 28 yards, including a pass breakup. The Titans had trouble throwing the ball all day, relying heavily on running back Derrick Henry, who the Giants managed efficiently. Henry finished with 82 yards on 21 carries, averaging a measly 3.9 yards per attempt.

The only way Tennessee was able to attack the Giants through the air was by targeting running back Dontrell Hilliard in the receiving game, exposing coverage flaws at the linebacker position.

Unfortunately, the Giants don’t have the most athletic linebackers, so in man coverage, they struggle to a large degree. Hilliard scored two touchdowns and recorded 61 yards on three receptions.

Other than the major coverage issues at linebacker, Adoree Jackson had another stand-out performance, leading the way as the team’s top corner. Jackson enjoyed 65 total snaps, including 39 in coverage, giving up 27 yards on three targets. Jackson was stout, also producing three tackles, helping in the run game, and sniffing out a jet sweep on an important drive in the second half.

Luckily, the Panthers’ pass blocking grade ranked as the 28th best in football after Week 1, meaning the Giants can easily dial up a significant amount of pressure and put quarterback Baker Mayfield in immediate distress. Hopefully, that will help the secondary and force mistakes from Carolina’s new passer.