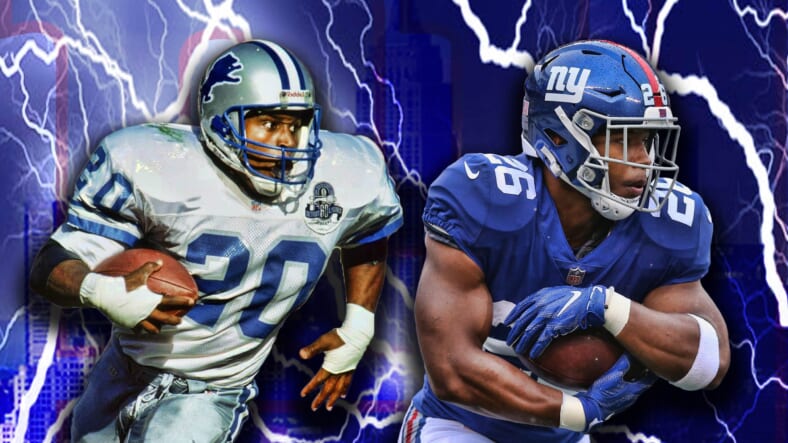 There is no doubt that New York Giants‘ running back Saquon Barkley is a generational talent. After only one season, Barkley is arguably the best running back in the NFL already. He was an incredible prospect coming out of college and he proved it was not just hype in his rookie season.

Barkley’s rookie season was legendary and if he continues at this rate then he could be one of the best running backs of all time. So how does Saquon Barkley compare to other NFL legends before him?

Leading The League In Scrimmage Yards

In 2018, Saquon Barkley lead the NFL in scrimmage yards with 2,028 total yards. Even though he was just a rookie, Barkley was dominant as a runner and as a receiver.

Barkley cracking 2,000+ scrimmage yards as a rookie is highly impressive. To put it in perspective, NFL legend Barry Sanders only accomplished this feat twice in the entirety of his historic career.

Saquon Barkley played behind one of the NFL’s worst offensive lines in 2018. For Saquon, it did not matter at all. Barkley still averaged an insane 5.0 yards per carry while totaling 1,307 rushing yards and winning AP Offensive Rookie of the Year.

A lot of Barkley’s yards came from big plays. Saquon Barkley had 8 plays over 40 yards last year. In the last 28 years, that has only done been twice. Barry Sanders did it in 1997 and Chris Johnson did it in 2009. Barkley is a generational talent and it is almost unbelievable he was able to do this as a rookie.

If Saquon can continue to be such an explosive runner, he will get his name into the same conversations as Barry Sanders, Eric Dickerson, and all the other legends.

Saquon’s explosive running style did not get him into any trouble though. Barkley was a clean runner who never put the ball on the turf in his rookie season. Barkley had 350+ touches and 2,000+ scrimmage yards with an amazing 0 fumbles.

Other rookie legends with the same number of touches and total yardage were not nearly as efficient with the ball as Barkley. With the same touches and yardage requirements, Barry Sanders fumbled 10 times as a rookie, Emmitt Smith 7 times, OJ Simpson 6 times, Marcus Allen and Zeke Elliot 5 times each, David Johnson and Adrian Peterson 4 times each, and Todd Gurley 3 times.

The legendary runner that Barkley has been compared to most is Barry Sanders. Sanders was a tackle-breaking machine and Barkley has proven to be one as well. In fact, Saquon forced more missed tackles than anyone else last season with 71 total avoided tackles (Pro Football Focus).

Here is a video of the elctrifying running style of Barry Sanders:

Now check out this video of Saquon Barkley:

The two players run with such similarity. They are insanely agile and can make jump cuts whenever they please. No one seems able to tackle Sanders or Barkley. Saquon has a running-style so similar to the legends and put up record-setting production as a rookie. If Saquon can continue with this level of play in his career, he will be one of the best running backs of all time.