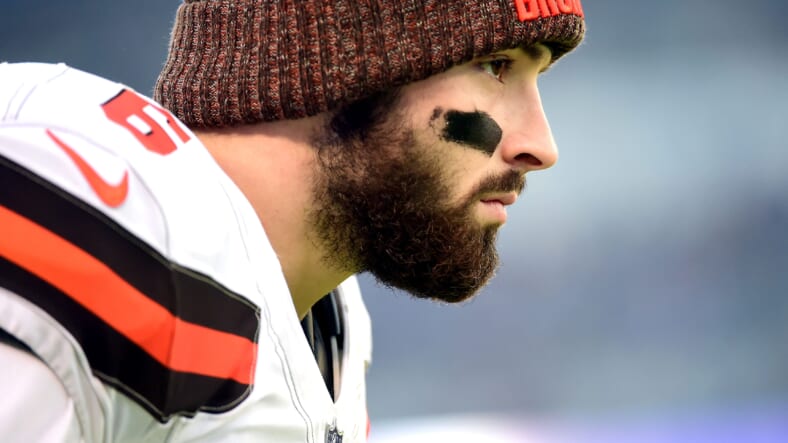 The New York Giants don’t seem too concerned about the latest comments from a Cleveland Browns player – there’s already been something of a back and forth between the two teams this offseason, ever since Odell Beckham Jr. was sent there as part of a trade which greatly changed the landscape of the Giants roster. Now, however, the current subject isn’t Beckham but Daniel Jones, following some comments that Browns quarterback Baker Mayfield made that may or may not have been taken out of context.

Whether or not the comments were in context, though, the drama hasn’t shaken or distracted the Giants team too much, with the focus continuing to be on the last two preseason games.

“Heâ€™s in a long line of people that criticized that move. Thatâ€™s his business. If I were Dan, I wouldnâ€™t even address it, just like he hasnâ€™t addressed all of his other critics. The one thing about Dan is, donâ€™t confuse calm and composed for a guy thatâ€™s competitive and a winner. Iâ€™m fond of the phrase, â€˜still waters run deep,â€™ so thatâ€™s what I think of Dan. Beyond that, I have no other comment,” head coach Pat Shurmur told the media, during the buildup to to the team’s third preseason game against the Bengals.

“I try not to listen to much thatâ€™s said. I think Iâ€™ve done a pretty good job of that,” Jones himself stated about the situation. “I heard that before, I kind of have the same mindset, I certainly have a lot to focus on here, I have a lot to worry about here and Iâ€™m focused on that. Itâ€™s been good, but just focused on what Iâ€™m doing here.”

Jones certainly faced more criticism in the past, before his debut, than he does now. The team took him at number six overall, something that will likely remain controversial until Jones proves himself in the regular season as being worth the selection. For now, though, Mayfield isn’t going to be the only one to criticize the choice, and Jones has done a fairly good job in tuning it out, which likely showed in the rookie’s perfect performance in his first preseason game, and in the touchdown and overall decent outing in the second one.

We’ll see just how much playing time Jones gets in the third – if things follow the established pattern, the Giants may just give Jones more time on the field as he eases into the offense.