New York Giants Behind Enemy Lines: How to take advantage of the Dallas Cowboys 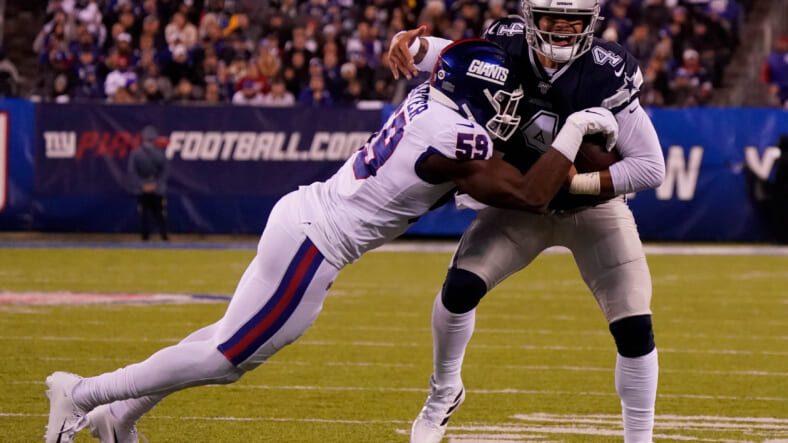 The New York Giants are gearing up to face off against the Dallas Cowboys in week five of the 2020 regular season.

Starting the year 0-4, the Giants are looking for their first win under new head coach Joe Judge. However, that has seemingly been difficult to come by, with the offense averaging a measly 11.8 points per game. However, the defense has been stellar in most facets, ranking fifth in yards allowed per game and 13th in points allowed.

Dallas offers an explosive offense, but the defense has been a mess through four weeks. They are allowing an average of 36.5 points per game, the worst in Dallas history.

Letâ€™s take a look at what is going on behind the scenes for Dallas and how the Giants can take advantage.

What is going on behind the scenes for Dallas, and how can the New York Giants take advantage?

1.) Conflict in the locker room

As stated above, the defense has been an absolute terror for the Cowboys. Last week against the Browns, they gave up 49 points, including 307 yards on the ground allowed, and 202 through the air.

Starting free safety, Xavier Woods stated that the defense lacks effort earlier this week. While he did say overall, the effort is there; there are specific players that you simply canâ€™t go 100%. That isnâ€™t what you want to say when your defense is struggling, and confidence is needed. This threw a wrench into the Cowboys culture and locker room spirits, and something the Giants must take advantage of in week five.

2.) Starting center is OUT

The Cowboys will be without Joe Looney, their starting center, in week five. After spraining his MCL in week four against the Browns, Dallas was forced to use fourth-round pick Tyler Biadasz.

While Tyler was serviceable in the absence of Looney, the Giants have to take advantage of a newly injected player who doesnâ€™t have the live reps during the regular season to prove his worth.

Creating disruption and forcing miscommunication at the center position is that is exactly how opponents have attacked the Giants in recent weeks with Nick Gates starting. Replicating that method should be Patrick Grahamâ€™sÂ priority against Dallas.

The secondary for the Cowboys is an absolute mess. As stated above, they are allowing 36.5 points per game, and their run defense is a big part of it.

However, they are missing their two starting corners in Anthony Brown and Chidobe Awuzie. That has left the corners extremely thin and should allow Daniel Jones to take advantage. With Jones failing to score a touchdown in over two games, this could be a redemption contest for the Giants, who desperately need to break out an offense and find their rhythm.

Coordinator Jason Garrett stated on Thursday that they are still trying to figure out their strengths, a baffling statement considering they have avoided using their players in advantageous ways.

The Cowboys will also be without their starting left and right tackles. This gives the Giantsâ€™ outside linebackers fantastic solo match-ups. Funneling pressured toward the A-gap is essential for the interior defensive line, which should give players like Lorenzo Carter, Kyler Fackrell, and Markus Golden 1V1 situations.

The Cowboys went into this week with three of their best pass rusherâ€˜s banged up. While they will likely be active for the contest, the Giants should try and overload them with power.

Their best pass rusher, Demarcus Lawrence, will likely try to take advantage of rookie Andrew Thomas, but his numbers this year have been shallow. He currently only has 11 tackles and hasnâ€™t recorded a sack.

Hopefully, Thomas can do his job adequately and hold Lawrence in place. This would be a fantastic matchup for Thomas to establish his dominance and finally take that essential developmental step forward.