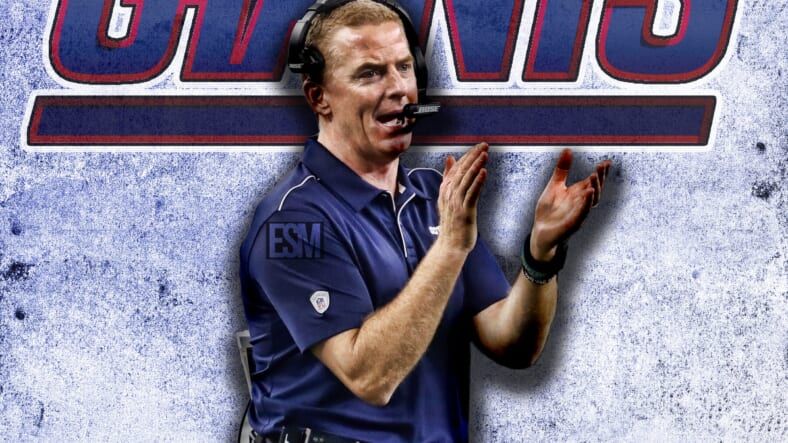 The New York Giants are currently averaging a measly 11.8 points per game so far during the 2020 regular season. Their inability to create points has been borderline mesmerizing, as they failed to even take one red zone snap in week three against the San Francisco 49ers.

They havenâ€™t scored a touchdown in over two games, and Daniel Jones hasnâ€™t thrown one since week 1 vs. the Steelers.

While many will blame Jones for this awful streak, offensive coordinator Jason Garrett has to shoulder some of the blame. The scheme has been vanilla and basic since itâ€™s inception against Pittsburgh.

Finding ways to be creative has been a struggle for the Giants, who lack play-makers in the receiver corps and running backs with diverse skill sets. Saquon Barkley was expected to be an influential factor in their scheme, but a torn ACL ended his season prematurely, forcing the Giants to go out and sign free agent running back Devonta Freeman.

Garrett spoke with reporters via Zoom on Thursday afternoon, and the statement he provided was borderline baffling.

Jason Garrett: “You certainly want to do the things that you’re good at and we’re trying to discover what those things are.”

Letâ€™s get a few things out of the way, Garrettâ€™s game has done nothing to maximize his playersâ€™ strengths. If you look over to the other side of the ball, the defense has been playing fantastic football, ranking fifth in yards allowed per-game and 13th and scoring. The offense ranks dead last in points for and has done nothing to prove that they are making positive steps forward.

The New York Giants have done the opposite on defense compared to offense:

Defensive coordinator Patrick Graham has done a fantastic job activating his playersâ€˜ strengths, notably Blake Martinez and James Bradberry. Martinez has been injected into the run game and has done a stellar job flying around the field and making plays. They have taken them out of coverage and utilized him as a run-stopping first linebacker. However, Garrett has failed to recognize what his offense of playmakers are capable of doing.

As we know, second-year receiver Darius Slayton is primarily active in the deep secondary. Taking shots down-field is a necessity, which extends the defense and forces them to drop into coverage, which opens up the running game. While the offensive line is undoubtedly to blame for most of their struggles, there are ways to stretch the field and keep defenses on their toes.

Opponents are simply stacking the box and keeping things in front of them, while Garrett deploys Slayton in an intermediate route scheme. In addition, Golden Tate is best used in space, which means wide receiver screens could be a good way to maximize him. The Giants have failed to get him the ball and prioritize yards after catch.

Looking at Evan Engram, who has taken a significant step backward in 2020, Garrett has utilized him on short hooks, mesh, ins and out routes. While he does excel in those scenarios, they need to extend the field with his speed and get him into open space. In week four against the Los Angeles Rams, Engram didnâ€™t run a single route more than 15 yards downfield. That is simply malpractice and something that needs to change moving forward.

So, we can see that Garrettâ€™s scheme has significantly limited his playersâ€™ potential, and if he listens to some of the points Iâ€™ve made in this article, we should see the offense open up a bit more.