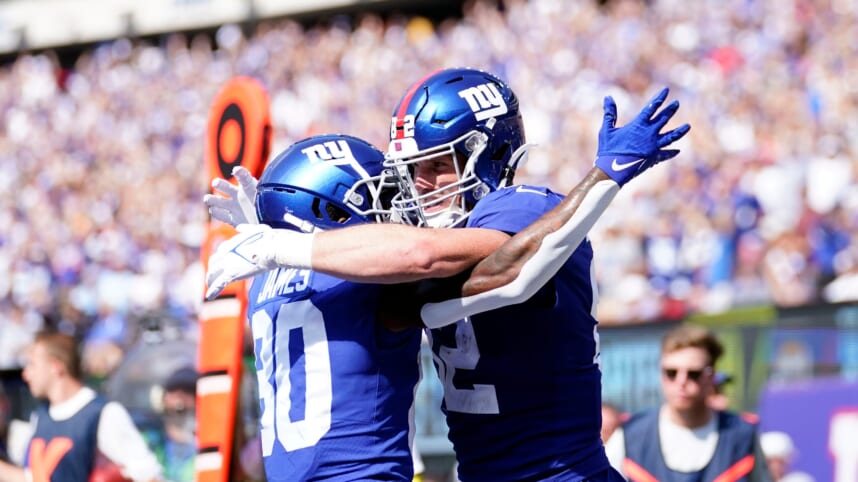 The New York Giants could be without rookie tight end Daniel Bellinger for the next few weeks after sustaining a serious eye injury. Bellinger will require surgery to correct a broken eyesocket sustained against the Jacksonville Jaguars in Week 7.

Bellinger had already become a force for the Giants on offense, providing stellar run-blocking efficiency and offering three touchdowns in the red zone. His development has been obvious on a week-by-week basis, but the Giants will now need to supplement his loss.

Big Blue has Tanner Hudson and Chris Myarick on the roster already, signing former Jets tight end Lawrence Cager to the practice squad last week. However, they’re not done adding talent, bringing back familiar face Andre Miller after fracturing his forearm this past summer and being placed on injured reserve.

The New York Giants have an opening at TE:

Miller put together a solid training camp before going down, making a good argument to land on the 53-man roster. Coming out of Maine, Allan wasn’t drafted in 2022 but signed as an undrafted player with hopes of landing on the roster. At 6’3″ and 223 pounds, Miller stood out during the Fan Fest scrimmage over the summer. He had shown more efficiency as a blocker than anticipated, proving enough to offer another opportunity after recovering from his arm injury.

Since the Giants have reps open for the taking, Miller has an opportunity to get back in the mix after missing the past few months.