New York Giants: Absurd Tom Brady Rumors May Not Be So Absurd 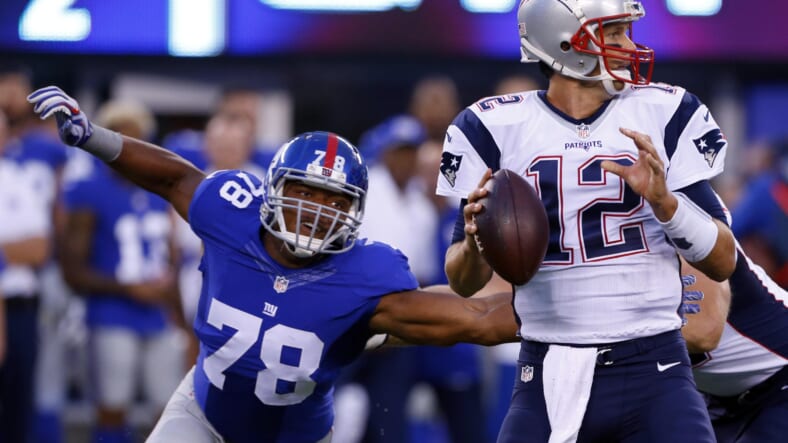 New England Patriots quarterback Tom Brady going to the New York Giants? If you’d brought that idea up a year ago it would seem like something out of a video game, a pure fantasy move, but through this offseason it’s proved to be a move brought up by multiple sources as an actual possibility.

Those sources range in their importance and credibility on the matter but at this point in the offseason as we head towards free agency, the talks about Brady to the Patriots haven’t been dispelled. This time, the one talking about it is NFL Network reporter Michael Giardi, who claims that actual executives and coaches see Brady as potentially leaving. And on the list of potential landing spots is the Giants.

Spoke with a number of NFL people over the last 36 hours or so here in Indy. The initial reaction has been "there's no way Tom Brady is leaving New England," but as you dig deeper, execs/coaches/scouts see the Titans, Raiders and Giants as possible suitors.

The Giants already have their apparent starter in Daniel Jones but throwing a second year player into the starting role from the beginning of the season is a risky move. There is some sound logic behind the Giants acquiring Tom Brady and letting Jones pick up more knowledge and work on some problems with his game before throwing him into the high pressure role of being the team’s sole starter, but there’s multiple factors at play when it comes to how realistic a deal is.

If Brady is going to leave the Patriots, it will likely take a good offer to entice him. Would the Giants be willing to make a competitive offer compared to other potential landing spots such as the Titans or the Raiders, rather than putting cap space and money into improving other positions instead of spending on one spot the Giants are believed to be covered in already?

Furthermore, do the Giants even want to keep Jones on the bench for a veteran quarterback after keeping Eli Manning out for most of last season so Jones could get starting experience? While bringing Brady in would be financially beneficial for the team from a marketing standpoint, the Giants have already shown some commitment to running with Jones over a veteran option.

Those and other questions remain, but with Brady becoming an unrestricted free agent next month, we’re not far off from seeing how the front office handles this opportunity.