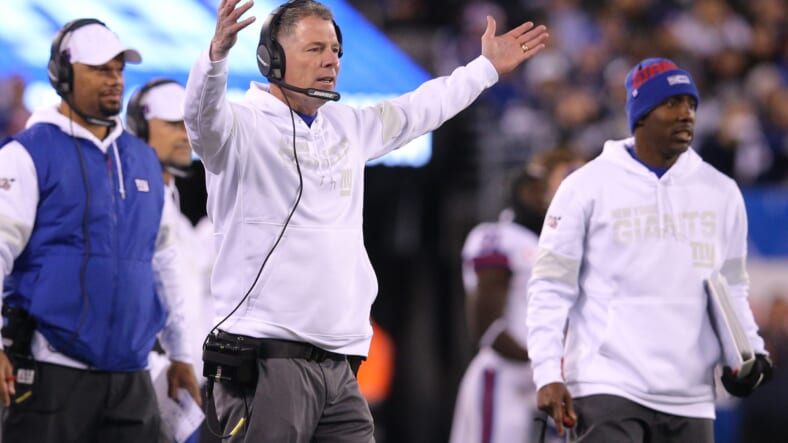 After another loss to the Chicago Bears in week 12, the New York Giants sit at 2-9 on the season and are slotted into the 2nd overall spot in the 2020 NFL Draft. The silver lining is another top-pick, but the lack of execution across the board is consistent, especially in the form of head coach Pat Shurmur’s mistakes.

1.) His lack of creativity on offense

When the Giants needed a late score against the Bears in the fourth quarter on Sunday, Daniel Jones and the offense marched down the field and hit pay-dirt, utilizing an up-tempo offense.

Shurmur has seldom used the hurry-up offense to put the opposing defense on its heels. Alternatively, he has continued to operate a predictable scheme, running inside zone runs on first down and creating a second-and-long situation, just to find ways to get his receivers in a position to fall short of the first down marker on third down.

Continuing with this failing system will only hold the offense back. Rookie quarterback Daniel Jones has looked great at times but porous in others, mainly at the expense of the offensive line. Shurmur, though, has not found ways to get the ball into his receiver’s hands, let alone star running back, Saquon Barkley’s. The former 2nd overall pick in the draft was only targeted three times on Sunday.

There have been countless times Shurmur has completely mismanaged the clock during the 2019 season, but on Sunday, he managed to spend all of his timeouts with four minutes left on the clock. Factor in his inability to run a hurry-up offense down two possessions with five minutes on the board, and you can continue to shake your head at his mishaps.

Shurmur had the offense huddling and running the ball late in the game, instead of increasing the tempo and confusing the Bears defense, which he should have been doing all game. Sunday’s loss is only one of the many examples you can use to break down Shurmur’s poor time management skills, and this should be a significant reason the Giants consider letting him go at the end of the year.

3.) The players aren’t buying into his ideology

The BYE week was full of a whole lot of nothing, as Shurmur didn’t make any coaching changes to supplement his team’s poor performances this season. He also failed to make several personnel changes, including at right tackle where Nick Gates should have been featured. Instead, he plugged Mike Remmers back into his starting role as if the Giants have a chance at competing for a playoff spot. Seeing what Gates has should be a priority at this point in the season.

Aside from his inability to consider the obvious, the players don’t seem to be interested in giving a full effort. Clips of DeAndre Baker and Janoris Jenkins giving up on numerous plays tells a story of zero accountability or discipline and a lack of respect for their head coach, who ultimately has to deal with the carelessness.

The only tough-guy moment Shurmur has during the BYE week was when he turned off the music at practice and stated the team needed to be in the moment, which clearly didn’t work as they were trampled by the Bears in the second half of the game, failing to put any points on the board until the waning moments of the defeat.