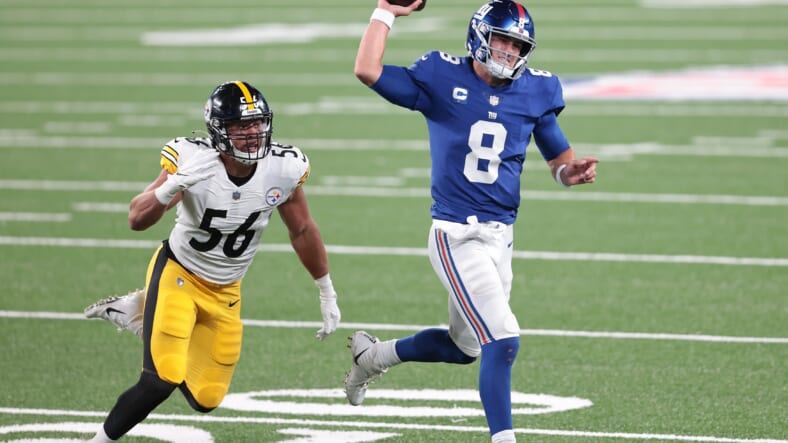 The New York Giants are gearing up to take on the Denver Broncos in Week 1, and while virtually all of their offensive weapons are clawing their way back from injury, there’s optimism some will be available. With John Ross being placed on injured reserve this past week and Kenny Golladay still unsure if he will be available, QB Daniel Jones must prepare for the reality that his arsenal may be without a few weapons.

It’s entirely possible head coach Joe Judge is keeping the injury designation for their top players under the table, restricting Denver from gaining a competitive advantage. Forcing them to game-plan for multiple different players and combinations could cause issues with their defense. Judge will provide injury updates early this upcoming week, but they will likely avoid updates regarding Golladay, Saquon Barkley, and Kadarius Toney until the final moments.

Three keys for the New York Giants to beat Denver:

After witnessing an ugly red-zone interception in the Giants’ final pre-season game against the New England Patriots, it’s clear QB Daniel Jones is still prone to making poor decisions. Jones has 22 total interceptions and 29 fumbles over two professional seasons, and unless he can alleviate these turnovers, Jones will once again by battling himself on a weekly basis.

However, Jones did enjoy a three-game stretch last season before suffering a hamstring injury where he didn’t turn the ball over one, indicating he’s capable of playing safe and efficient football. Against a tantalizing Broncos defense, Jones must stay safe and live to see another down. If he can accomplish that, there’s no question Jones has the ability to be the catalyst for the Giants in Week 1.

2.) The offensive line must stand their ground

Everything boils down to the Giants’ offensive line, including Jones’s ball security and decision-making. With Shane Lemieux in limbo before Week 1 and a position battle still unsettled at right tackle, there’s no telling who will be starting the season in the trenches. We can make educated assumptions that Andrew Thomas, Will Hernandez, and Nick Gates will all be featuring, but the acquisition of Ben Bredeson and Billy Price have complicated things a bit.

The front office being forced to send draft picks for unestablished OL talent right before opening day is a bit problematic, and expecting this unit to hold their ground against Von Miller and Bradley Chubb is a tough sell. If they can give Jones just enough time to get the ball out of his hands, the offense should have some success but expect a heavy running attack against Denver.

3.) The defense must hold Denver to sub-20 points

The Giants will likely have to rely on their defense in Week 1 as the offense works out its kinks and figures out their offensive line woes. The defense was the pride and joy of Big Blue in 2020, holding opposing teams to just 22.3 points on average. With Denver electing to go with Teddy Bridgewater at quarterback, the Giants will have to send plenty of blitzers to disrupt his vision and ability to read the coverages. The return of Lorenzo Carter and Oshane Ximines should aid in that goal, but it ultimately boils down to winning the turnover battle and winning time of possession.

Since the Giants averaged less than 20 points per game last season, we are using that standard for the defense’s performance. If Denver stays under 20 points on the afternoon, the Giants will have a far better chance at victory.