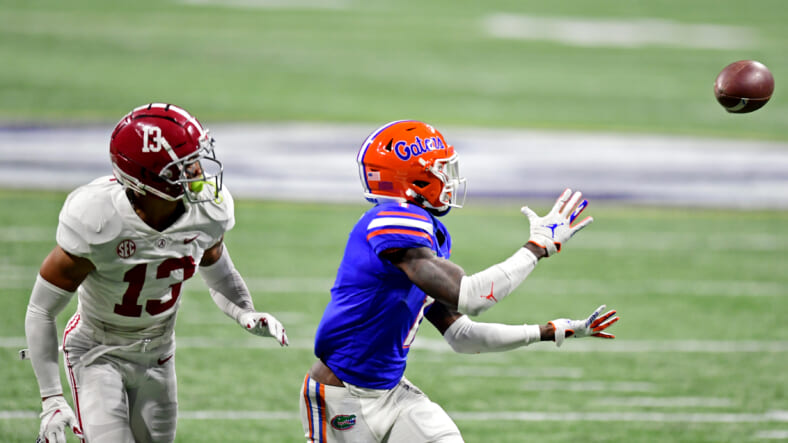 The consensus is that the New York Giants had a strong 2021 draft, acquiring multiple players who can make an instant impact while also adding draft capital for the future. At the end of the day, they put in place a contingency plan for quarterback Daniel Jones while also offering him weapons on offense and bolstering the defense with pass rusher Azeez Ojulari with the 50th overall pick.

The strategy this year was best player available and value, something that general manager Dave Gettleman has ignored in recent years. Over eight drafts, Gettleman had never executed a trade back, but he shocked the world and move back nine spots, adding a first-round pick and fourth-round pick in 2022.

Most analysts are grading the Giants positively after the draft. NFL Network analyst Daniel Jeremiah had great things to say to the Giants media:

“I think when you look at what they were able to collect, and I think when you look at where this roster is, it’s actually in pretty good shape,” Jeremiah recentlyÂ told the Giants Huddle Podcast. “I think just having some numbers to be able to spread out and to be able to get assets next year is huge. And there’s a little more certainty with the process next year. I’m all for that. Get some extra picks here and collect some picks for next year.”

The New York Giants FINALLY had a value-based draft:

Having additional assets in a draft class that will be far more familiar with NFL coaches due to the evaluation procedures opening up will be a benefit. This year, the lack of in-person communication and live visuals hurt scouts and upper management in their scouting processes. Most believe that draft capital next year will be significantly more valuable, so the Giants walking away with Toney and a future first-round pick is an absolute steal.

“Of all the things [the Giants] accomplished, I think getting those three picks next year might be my favorite.”

When it comes to Kadarius, the Florida stand-out receiver tallied 1,145 yards and 11 scores last year. He also had the highest missed tackle right out of any receiver in the draft class at 35%. He has only dropped three passes in four years, also having the lowest drop rate in the draft class. He is a stellar talent with unlimited upside, and given his physical attributes, the Giants are excited about his potential. So is Jeremiah.

“I think he gives you easy completions,” Jeremiah said about the No. 20 overall pick. “Just quick-hitters, get the ball in his hands. He’s phenomenal after the catch. You can do that, you can use him on jet sweeps, you can use him in the backfield some if you want to get him the ball that way. But I think just finding more dynamic players in whatever capacity you can use them I think is something the Giants really tried to focus on. They have to be more dynamic, they have to be more explosive, and I think he helps you accomplish that.

Toney will excel in the short/intermediate range, hauling in passes in space and utilizing his shifty abilities to make tacklers miss and churn out yards. The Giants need homerun hitters, and Kadarius is exactly that with his unique skill set.
The overall thoughts behind the draft are positive, and the Giants walked away with one of the best hauls in the NFL, according to most.