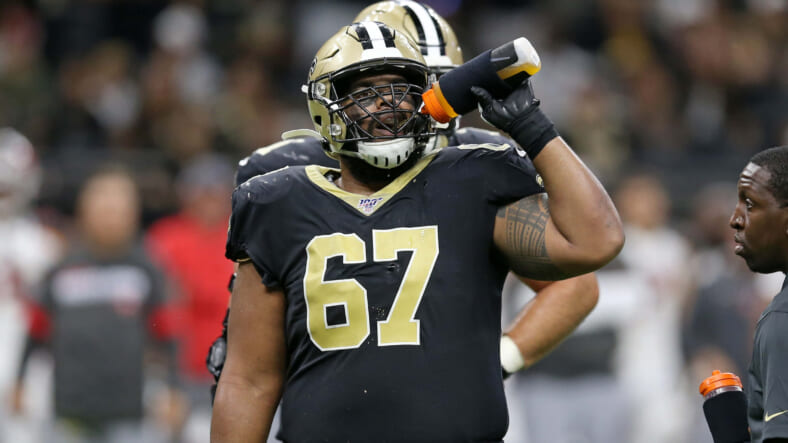 New York Giants expected starting left guard Shane Lemieux suffered a knee injury on Thursday, which required a cart to carry him off the field. The front office didnâ€™t allocate any resources toward bolstering the line this off-season, electing to sign receivers and strengthen the pass rush instead.

With Lemieux going down on the second day of training camp, a clear disregard for the trenches is boiling to the surface. Nonetheless, itâ€™s not too late to sign a free agent to help reinforce the unit.

Some might name David DeCastro, former Pittsburgh Steeler, as a potential option. However, most are considering his release from Pittsburgh as his retirement. Coming off a notable ankle injury, relying on him to be a regular starter is optimistic.

Former New Orleans Saints guard Larry Warford might be a better alternative. Warford logged a 71.4 overall pass blocking grade in 2019, in addition to a 76.6 run-blocking grade, per PFF. He allowed 3.0 sacks and 32 pressures over 1025 snaps. He primarily plays right guard, which would shift Will Hernandez back to the left side.

Traditionally, Warford has been a quality guard for the majority of his career, electing to sit out the 2020 season. In all three seasons with the Saints, Warford went to the Pro Bowl but saw a significant drop off his performance two years ago.

Depending on his price tag, Warford could be an adequate option to compete in the trenches on a one-year contract.

The free-agent guard market is extremely thin, and one of the better options available is James Carpenter. Carpenter played in 675 snaps with the Atlanta Falcons last season, but the former first-round pick struggled mightily. Last season, Carpenter allowed 3.0 sacks at left guard.

The Giants are comfortable with Zach Fulton competing at LG and even had Kenny Wiggins, formally on the Detroit Lions featuring with the starting team on Thursday. Carpenter is an experienced veteran, though, and would at least provide competition in the trenches if Shaneâ€™s injury is serious.