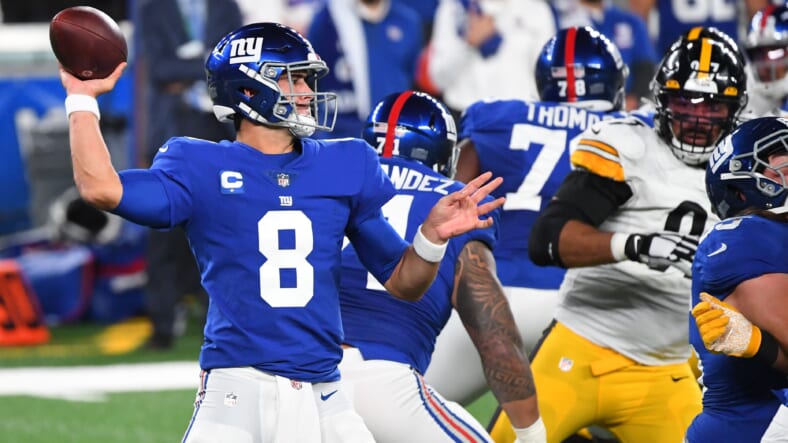 Daniel Jones is under fire from many fronts after his performance against the Buccaneers, where the New York Giants came close but fell short by a failed two point conversion. Jones had a mixed performance in the game and put them in a position to win in the first place through keeping the game alive at several unlikely moments. On the other hand, you could also argue that Jones cost the Giants the game with his two interceptions as well as the missed pass at the very end.

Frustration has been building since Jones’ rookie season around his turnover problem, but it boiled over for many with the interceptions playing a big part in losing another important game. Some fans have even called for Jones to be benched for a game in favor of Colt McCoy, who is far from a solution for the team.

But Jones also has his defenders, and one of them seems to be ESPN analyst Mel Kiper Jr. Kiper appeared on ESPN Radio and had several things to say about Jones and his current situation.

He said that Jones showed up big on Monday Night Football and that the last play of the game should have been a pass interference call. He also said that the interceptions from Jones are part of his growing pains.

“Daniel Jones is learning. Heâ€™s 20 starts into his career, guys. Heâ€™s not 65 starts in. Peyton Manning had 23 interceptions his fourth year in the league. He had 100 interceptions in his first five years. He had 53 the five years after that. [Jones] is learning, those are learning teachable moments,” Kiper said.

“People ask: â€˜when is he going to stop making those mistakes?â€™ Well, heâ€™s only a year and a half into his career, okay? Josh Allen in Year 2, was making mistakes just like that and in Year 3 heâ€™s not making any of those mistakes. Letâ€™s give these quarterbacks some time, okay?”

The Giants will have to stick with Jones for the foreseeable as they don’t currently have much of an alternative option. However, there will almost certainly be some form of quarterback debate if the team does replace Dave Gettleman at the end of the season. Jones is Gettleman’s pick after all, and it will have to be decided whether or not Jones is the future of the franchise.

For now, this is a make or break season for the young quarterback where his future performances could either dispel the complaints around his game or make them seem more legitimate depending on the outcome.