How will the New York Giants supplement loss of Leonard Williams on Monday night? 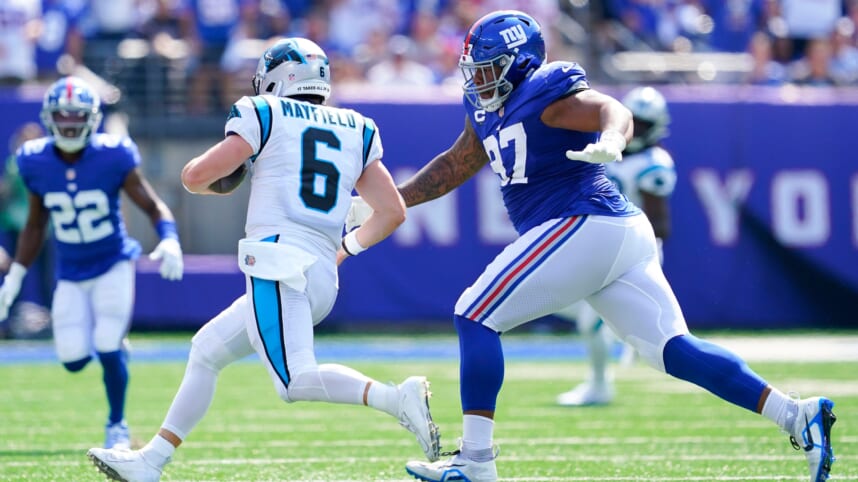 The New York Giants are gearing up to face off against the Dallas Cowboys on Monday night, but they are expected to be without several impact players. Interior defensive lineman Leonard Williams is “doubtful” for the contest after suffering a knee injury against the Carolina Panthers last week.

In addition, wide receiver Kadarius Toney is also not expected to play, dealing with a hamstring issue that has hampered him to start the 2022 season.

However, the defense is projected to get back both Azeez Ojulari and Kayvon Thibodeaux, the team’s top two pass rushers. In their absence, Oshane Ximines and Jihad Ward have stepped up to the plate — having adequate depth at outside linebacker is always a good thing.

How will the New York Giants supplement loss of Leonard Williams?

Replacing Leonard Williams, though, is not so easy. As one of the Giants’ most reliable players, we should expect to see Ward kick inside with his frame since he won’t be featured as an edge rusher in this game.

Fellow interior lineman Dexter Lawrence is the one who needs to step up big to supplement the loss of Williams.

Lawrence has started off the 2022 campaign on a high note, recording six total pressures, including four tackles and two stops in the run game. He predicates his style on effort and never letting quarterbacks outrun him.

“One of my goals is to never let a quarterback outrun me,” Lawrence said. “That’s a little competitive thing I have in my head all the time. I was just trying to go get him. I don’t think it’s crazy. It was a big third-down play, so things like that are how I keep going.”

Speaking of outrunning a quarterback, Lawrence chased down Baker Mayfield on the sideline last week in the win over Carolina.

For a 342-pound human being to move the way Dexter does, it is incredibly impressive. In fact, defensive coordinator Wink Martindale praised him for his motor.

“He’s a problem,” Martindale said. “The play where he chased Baker Mayfield down, I don’t know that in my career I’ve ever seen a big man like him make a play like that. That’s the kind of effort and leadership he brings to the defense.”

Lawrence recorded three quarterback hurries, and a quarterback hit last week against the Panthers, showcasing his pass rush prowess. If he can continue compounding his successful performances, the Giants can mask losing Williams in the trenches, but the former first-round pick needs to elevate his game against a stingy Dallas offense.

According to PFF, the Cowboys have the ninth-ranked pass blocking unit and 19th ranked run blocking unit over two weeks. Of course, right guard Zack Martin has performed admirably but left tackle Tyler Smith has had his fair share of struggles to open the year.

The Giants have a good opportunity to confuse Dallas’s offensive line with unique blitz packages, a staple of Martindale‘s defense. Don’t underestimate the impact that Lawrence can bring, especially after a strong start to the season.