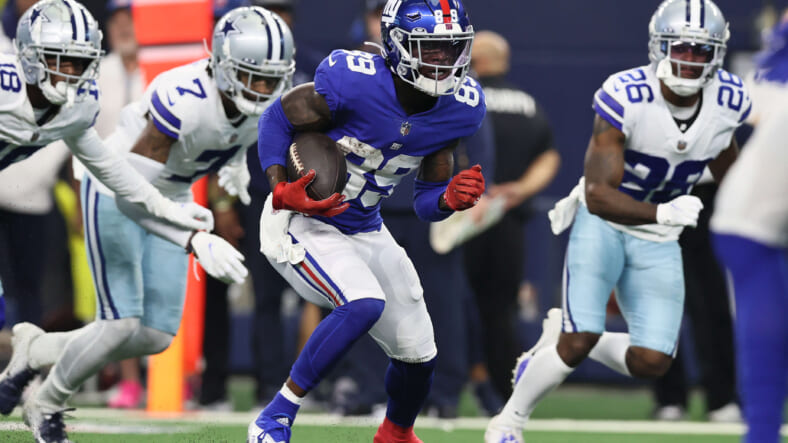 The New York Giants finally cleaned house. General Manager Dave Gettleman retired and Head Coach Joe Judge was fired. Now the Giants are searching for a new GM to run the front office. John Mara also wants to entrust the general manager with finding the head coach. One of the most intriguing head coach and general manager duos is Adam Peters and Mike McDaniel. This combination could maximize the talents of the Giants’ personnel, particularly wide receiver Kadarius Toney.

Over in San Fransisco, the 49ers possess a talented player with a skill set similar to Kadarius Toney. That player is wide receiver, Deebo Samuel. Samuel has had a dominant season for the 49ers playing as a wide receiver/running back hybrid in Kyle Shanahan’s offense.

Deebo Samuel was a big-play threat this year, leading the NFL in yards per reception (18.2). Samuel totaled 77 receptions for 1405 receiving yards and 6 touchdowns this season. But the shifty receiver also took 59 carries for 365 yards and 8 rushing touchdowns in 2021.

This hyrbrid concept is something that the Giants toyed with this season. Occasionally, the Giants would line Kadarius Toney up in the backfield as a running back. Toney ran the ball only three times, though, as he struggled to even stay healthy and on the field. But the idea of playing multiple positions is not new to Kadarius. In college, Toney took 66 total carries in his four years with the Florida Gators, rushing for 580 yards and 2 touchdowns.

Kadarius Toney’s rushing ability is an aspect of his game that the Giants underutilized this season when their first-round pick took the field. The Giants could hire the San Fransisco 49ers-made GM and head coach duo of Adam Peters and Mike McDaniel this offseason. In that case, the Giants could plan on turning Kadarius Toney into a dynamic offensive weapon like Deebo Samuel.

The New York Giants are continuing to interview various general manager candidates in their search to replace Dave Gettleman. Adam Peters has gained a lot of popularity amongst the fanbase, as has head coach candidate Mike McDaniel. The idea of pairing those two together in New York is exciting, and could be just what the Giants need to revatilize their offense.

Kadarius Toney is an extremely talented, young player in the Giants’ offense. There is no coach more qualified to extract all of the talent out of Toney than the one involved with the emergence of Deebo Samuel: Mike McDaniel. This would be a bold direction for the Giants to take the team, but it is a direction that could pay off with a high-flying and explosive offense.