How much better is the New York Giants’ offense with Saquon Barkley on the field? 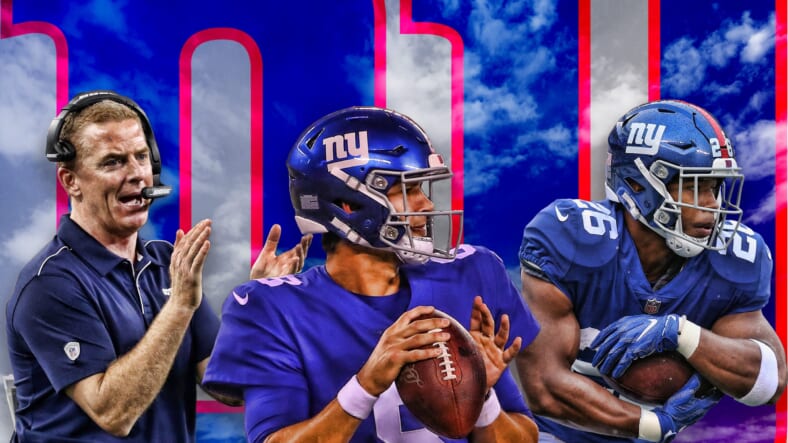 When the New York Giants drafted Saquon Barkley 2nd overall in 2018, they saw a generational running back that could change the dynamic of a modern NFL offense. Barkley, who the Giants paired with WR1 Odell Beckham Jr. during his rookie season, helped lead the unit to 23.1 points per game on average.

Fast forward to 2020, and the Giants or struggling to average over 17 points, as Barkley suffered significant knee damage in Week 2 against the Chicago Bears, holding him out for the remainder of the season. During Barkley’s rehabilitation, the Giants rolled with Wayne Gallman at running back, and while he served valiantly, they simply didn’t have the talent at receiver to help quarterback Daniel Jones maximize his talents.

In fact, the Giants have done very little to help Jones succeed in the NFL, building a liability of an offensive line and failing to provide him with high-end wide receiver talent.

However, the return of Barkley will help the offense tremendously, as Jones has earned a 92 passer rating with Barkley in the backfield compared to 78.9 without him. In addition, the offense averaged 22.5 points per game, with the star back on the field since 2019 compared to 17.5 without him.

We know how polarizing a player like Saquon can be, as he tallied 2,028 yards from scrimmage in his rookie season, paired with 15 total touchdowns. His success entirely depends on the playcalling, and it seems coordinator Jason Garrett will get him more involved as a receiver this upcoming season than a traditional back.

If the Giants were smart, they would steal a few pages out of the New Orleans Saints’ playbook and how they use Alvin Kamara, one of the most deadly pass-catching running backs in the NFL. Barkley has that type of talent, the Giants have forced him to run inside zone and power, which doesnâ€™t fit his mold entirely.

The best way to maximize Barkley’s talents is to use him on outside zone runs and running back sweeps, giving him more time to pick holes and make the defenders miss. In the passing game, Barkley can be utilized on angle, seam, flat, and wheel routes to get him more involved. Barkley has a 73.4% catch rate in his career, which is better than most receivers. Of course, the majority of his receptions come in the shorter portions of the field but still averages 8.2 yards per reception.

The offense has more elements at play with Barkley in the mix, as he commands attention from opposing defenses. However, it is a combination of Barkley and a WR1 that really creates havoc for opposing coordinators, as they canâ€™t simply stack the box to shut down the running game in fear of a top receiver taking advantage. With fewer linebackers and safeties playing in the box, Barkley will have more room to work with and play action will be more effective.

Against Denver in Week 1, anticipate a heavy running game and play-action scheme, as they have a tremendous group of corners and safeties, which will limit how successful the Giants are moving the ball downfield via the passing game.