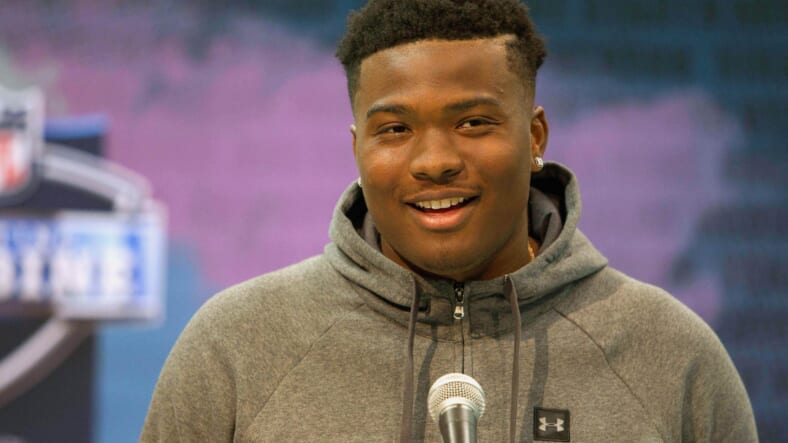 If you don’t think the front offices of the New York Giants and the Washington Redskins will be on the edge of their seats during this Sunday’s game between the two teams, think again. This game may be a bottom-of-the-slate game to most, but to two of the oldest franchises in the NFL, it has a ton of meaning.

The winner is actually a loser in this game. If the Giants win, they clinch third place in the NFC East and in the process will likely have played themselves out of a chance to select Ohio State edge rusher in next April’s NFL Draft. They also will draw a third-place schedule rather than the last-place one they’ve enjoyed (lol) these past two seasons.

Washington would love nothing more than to win this game as it will reaffirm owner Dan Snyder’s decision to put the football in rookie quarterback Dwayne Haskins’ hands, which was a bone of contention he had with former head coach Jay Gruden. Snyder fired Gruden after an 0-5 start this season and replaced him with assistant Bill Callahan but it is widely suspected that it was Gruden’s handling of Haskins that got him fired.

But if the Redskins lose, it won’t be the worst thing in the world. They’d end up with the second overall pick and would live to stick it to the Giants by selecting Young themselves.

Giants’ rookie quarterback Daniel Jones and Haskins will be facing each other for the the second time, but this game will be the first time they will do so as starters. In Week 4, the Giants defeated the Redskins, 24-3. Jones started for the Giants and completed 21 of 33 passes for 225 yards with a touchdown and two interceptions.

Haskins received starter Case Keenum in that game and was naturally not ready. He went 9-of-17 for 107 yards but tossed three interceptions, one of them a pick-six to Jabrill Peppers.

Haskins didn’t get his first start until Week 9 but has started every game since. He lost his first two starts then won the next two. His last two starts were both winnable games against Green Bay and Philadelphia in which he showed increasing poise and confidence.

This week, he’ll face Jones – a player he’ll eternally be connected with – and the Giants, who are as beatable as an NFL team can be these days. Haskins will undoubtedly love to show the Giants’ brass that they should have taken him with the 6th overall selection last April instead of Jones. He’d also like to clear the air in his own building as it was rumored that the reason why the Giants took Jones so high was that they felt the Redskins wanted Jones, too, and would have selected him with the 15th pick, acing out the Giants – who also had the 17th pick.

The Giants surely would love to see Jones get the better the play on Sunday. They pushed all of their chips into the middle of the table on Jones and need to hit on that pick if the current regime is to remain intact. One game this early int he process should not determine that, but the Giants’ brass needs some kind of sign that they are headed in the right direction.

Jones coming out an laying an egg in Washington and getting outdueled by Haskins could cause John Mara to decide to flip the switch on his floundering organization.