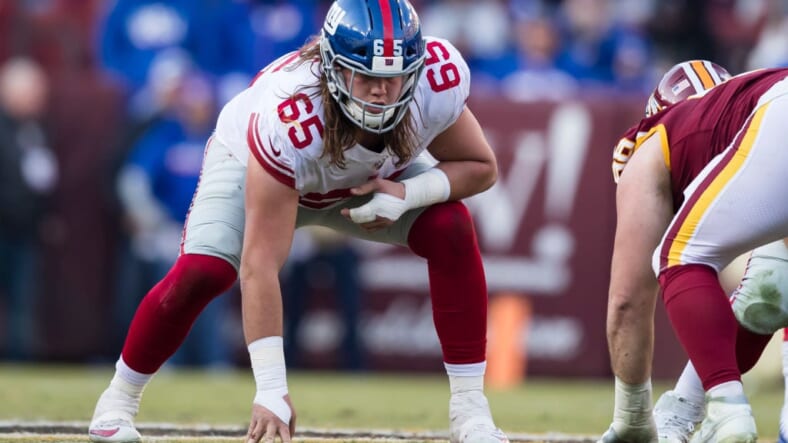 The New York Giants have remained patient with former undrafted free agent Nick Gates from the 2018 class of collegiate talent. Coming out of Nebraska, Gates always had a competitive edge and a chip on his shoulder, putting together an admirable rookie season with the Giants back in 2019. He played in 291 total offensive snaps, proving enough to warrant a starting job in 2020 as the team’s primary center.

Gates played in 1,015 snaps during that season, allowing 16 total pressures and not giving up a sack. However, with desperate needs across the offensive line in 2021, management eventually shifted Gates over to left guard, plugging in Billy Price early on in the season.

Gates played in just 74 snaps before being rolled up on and breaking his leg in two places. Over the following months, Gates would undergo seven different surgeries, with expectations he may never walk again, let alone play football. That’s what makes his rehabilitation and return that much more impressive.

Big Blue recently activated Nick off the physically unable to perform list, presenting 21 days to decide if he should be reinstated to the active roster or allowed to leave following his recovery. In an extraordinary turn of events, the Giants decided to activate him on Wednesday morning, completing one of the most inspiring returns you could hope to see.

The question is, how soon can the Giants begin to rely on Gates once again, having just lost Evan Neal and Ben Bredeson against the Jacksonville Jaguars in Week 7? Neal sustained an MCL sprain that will keep him out for several weeks, and Bredeson also picked up a knee injury. The timetable for their return is unknown, so Gates could get himself a few reps within the next week or so.

Luckily, the Giants have a Week 9 BYE, giving some of their injured players more time to rehabilitate and make an impact down the stretch.

Given the fact that Gates is now on the active roster, one can only assume he’s ready to feature in a regular season game. He had been taking live reps during practice, which indicates he’s healthy enough to play once again but to what capacity is yet to be seen.