Giants make starting decision at left guard ahead of Week 1 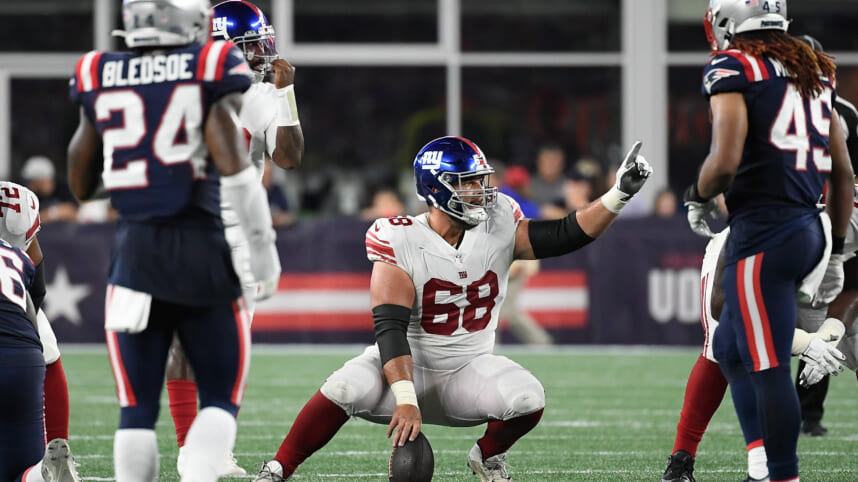 The New York Giants have seemingly made a crucial decision regarding their starting lineup in Week One of the 2022 regular season. Ben Bredeson is listed as the starting left guard in the Giants’ first unofficial depth chart against the Tennessee Titans. Injuries made this decision difficult for New York as the original projected, Shane Lemieux, was placed on injured reserve to start the season. Lemieux will be absent from the lineup until at least Week Four. Until Lemieux is ready to return, Ben Bredeson is the presumed starter at left guard.

Ben Bredeson will serve as the New York Giants starting left guard in Week One with Joshua Ezeudu listed as the first backup on the depth chart. Newly claimed offensive lineman Tyre Phillips is listed behind Ezeudu as the third-string left guard.

Ben Bredeson is entering his second season with the New York Giants. He will begin this season as the Giants’ starter at left guard despite dealing with injuries over the summer. Bredeson nursed a right elbow injury that caused him to miss some time in August. However, he was playing exceptionally well in the preseason prior to suffering the injury. Now that Bredeson is healthy again, it appears his strong preseason performance has earned him the starting gig with the Giants.

Ben Bredeson is playing for his job every week while Shane Lemieux works his way back from injury. Shane Lemieux seemed to earn the starting job early in the summer. An unfortunate lower-body injury has kept Lemieux sidelined, but a competition for the first-string reps will ensue as soon as Shane is healthy again.

Tyre Phillips is a player to keep an eye on. The Giants recently acquired Phillips on the waiver wire. Phillips played in 10 games with five starts in 2021. Phillips is a tackle/guard that spent the first two seasons of his career with the Baltimore Ravens. He’s a 6-5, 344-pound lineman that could rise his way up on the depth chart.

The New York Giants did a lot of work this offseason to revamp their offensive line. Injuries have made it difficult to set a final lineup all summer, but the team has landed on the following group for Week One:

Ben Bredeson has only started one game in the past. He started in Week Three of last season for the New York Giants. Bredeson is an inexperienced player, but he has been with the Giants for two seasons. Week One will be a massive opportunity for Ben Bredeson.