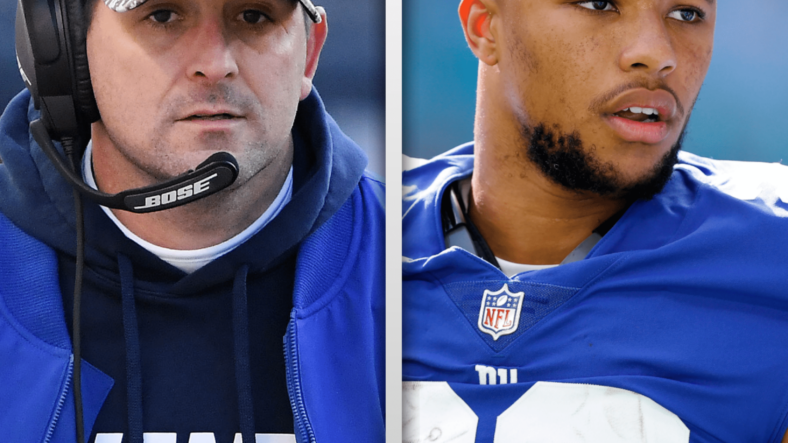 The New York Giants are on the brink of collapse, having lost their last five games and headed toward a potential sixth against the Washington Football Team this upcoming weekend.

Big Blue hasn’t only dropped their last five games, they’ve been absolutely demolished in each, scoring just one touchdown in their last three games combined.

With the team falling apart at the seams, the Giants could go in a number of different directions, especially with general manager Dave Gettleman expected to retire on Monday post Week 18. A new GM could elect to keep Joe Judge and his coaching staff for one more season, but if ownership chooses to bring in a fresh face with a new ethos, they could fire Judge and move forward with a new staff and philosophy.

However, there are still players within the organization who are willing to speak to the media about Judge’s positives and his passion for the team, notably star running back Saquon Barkley. Judge himself had great things to say about Barkley and the adversity he’s overcome after being played by injuries this season.

Barkley has been a shell of his former self, recording his first 100 yard game against the Chicago Bears in Week 17 over 21 carries. The Giants only completed four passing attempts on 11 tries. The game plan heavily revolved around running the football, as Devontae Booker also picked up 18 carries in the process but averaged half the yardage  Barkley managed.

Given Saquon’s rookie deal is quickly coming to an end with his fifth-year option commencing in 2022, it is possible to Giants look to trade the running back and acquire draft capital while alleviating themselves of his cap hit. Barkley will be the ninth highest-paid running back in football, preparing to earn $7.2 million in the final year of his rookie deal.

Judge was noncommittal toward Barkley but did come to his defense about putting forth another quality season similar to his 2018 campaign, where he collected over 2000 all-purpose yards and 15 total touchdowns.

“In terms of what next year brings, we’ll have to see when it comes, but I know he’s going to work, train and put himself in the position to have the best year possible.”

After Judge’s words of optimism, Barkley responded with positivity of his own, defending his coach’s confidence in the team in the process going on behind the scenes.

Unfortunately for Judge, the results on the field are all that matters as he continues to rely on an argument that isn’t visible. For fans, though, “behind the scenes” isn’t a tangible result that can be measured. In fact, the team looks more lost than during Ben McAdoo or Pat Shurmur’s tenure.

Fortunately, fans have a bit of hope resting on the shoulders of a new general manager, but it is entirely possible ownership looks to an internal candidate as a stopgap solution.