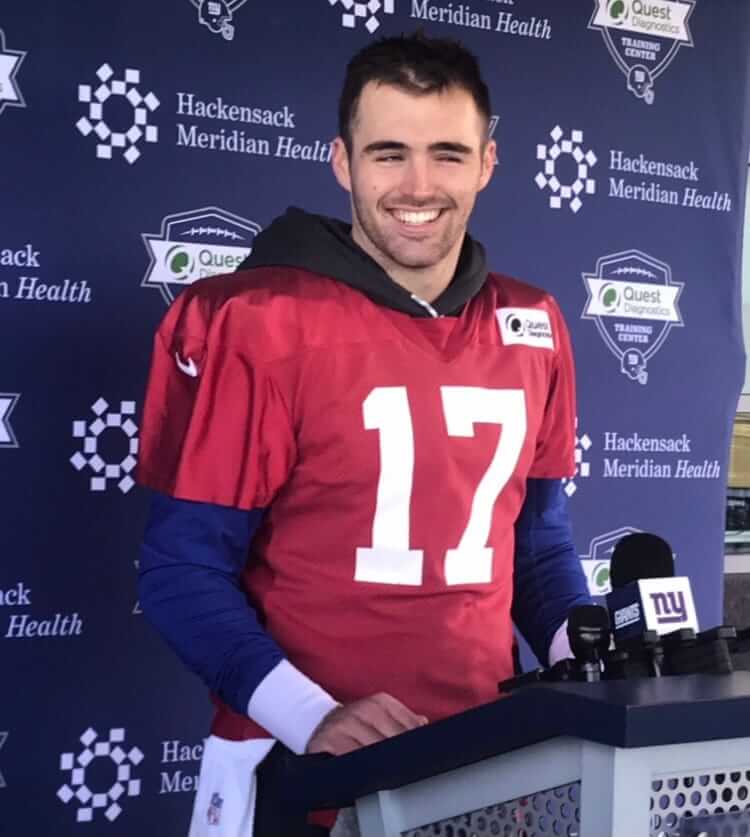 This could be the conundrum stemming from Daniel Jonesâ€™ neck injury that, according to reports, is likely to rule him out of Sundayâ€™s contest against the Los Angeles Chargers. Should he remain sidelined, Jones would have missed a second straight game. The 24-year-old was seen by doctors on Monday and will not be cleared for contact until he is fully healed.

Per Ian Rapoport, Jones will miss more than Sundayâ€™s game and could be out for multiple weeks.

â€œDaniel Jones will likely be out multiple weeks while dealing with a neck injury, NFL Network Insider Ian Rapoport reported,â€ NFl.com reports. â€œThe fourth-year starter went down during last week’s win over the Eagles and was limited in practice before being ruled out for Week 13. He’ll undergo further testing Monday, with Rapoport noting there might be more than ligament issues ailing Jones. He’s now considered week to week.â€

Jake Fromm is now battling with Mike Glennon for reps after the backup entered the NFL’s concussions protocols after the loss to Miami. Quarterback Jerry Schuplinski has also tested positive for COVID-19.

Glennon is projected to clear protocols in time, but Fromm is deserving a chance, despite his short tenure with the Giants. This would be a huge opportunity for a player who was on the practice squad at Buffalo as recently as November 30.

The QB coachâ€™s COVID-19 quandary wonâ€™t only affect him as all of the Giants quarterbacks – including the practice squadâ€™s Brian Lewerke – could be deemed vaccinated close contacts who will have to undergo more frequent testing. Fromm spent 10 days on the COVID-19 list with the Bills in November after he tested positive as an asymptomatic carrier.

â€œThe plan right now is for Jake to continue in his role,â€ head coach Joe Judge noted. â€œWe have a lot of contingencies, whether itâ€™s the COVID contingency or the uncertainty in terms of the other quarterbacks. Weâ€™re talking internally about a lot of options right now personnel-wise, scheme-it-up, to see what we can do to address it and make sure weâ€™re building in-depth for a multitude of reasons.â€Â

All of this comes in the wake of an unexpected offensive setback as Freddie Kitchens has been calling plays. While things have gotten more technical, scoring has dipped from the 18.9 points per game under coordinator Jason Garrett, now fired, to 11.0 points a game under Kitchens.Â  The Giants also havenâ€™t gained more than 264 yards on offense in their last four games.Â

Itâ€™s unclear when the quarterback issue could be remedied as concussion recovery timelines differ from player to player. Jones was cleared just five days after entering the protocol and didnâ€™t miss a single start while Glennon took every snap against the Miami Dolphins.Â

â€œAt some point after the game, they came to me and just let me know they were looking at him,â€ Judge added, â€œso during the game there was nothing I was informed of.â€

The New York Sports betting does not tip the Giants for success in their upcoming game, with bookmakers attaching them to 4/1 while the Chargers are 4/21.

Fromm, meanwhile, isnâ€™t an unfamiliar player. Drafted in the fifth round by the Bills, he started for Georgia for three years and led them to the 2018 College Football Playoff national championship game, getting picked ahead of Indianapolis Colts backup Jacob Eason and Chicago Bears rookie starter Justin Fields before they switched schools.Â

Sunday was his first regular-season game in an NFL uniform, however.

The QB coach and offensive quality control coach Nick Williams spent extra time on the field with Fromm last week. Williams and Kitchens will have to do so this week given that Schuplinski can only participate virtually.

â€œWhen you go from Daniel to Mike, you want to push and stay as close to the offense as you possibly can, and you expect them to go out there and execute the game plan,â€ Judge explained. â€œFor a guy whoâ€™s only been here in your system for a couple days, youâ€™ve got to select more of a menu of what he can operate in and thatâ€™s not always limiting based on his ability, itâ€™s just based on being new in a scheme.â€Â